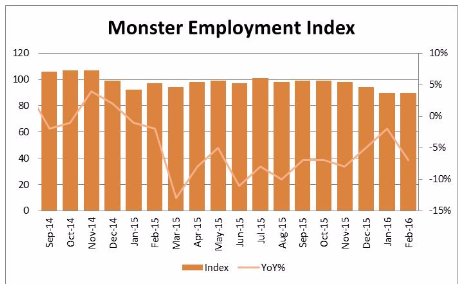 SINGAPORE, 29 MARCH 2016 – Overall online hiring in Singapore registered -7% year-over-year decline in February, falling further from -2% reported between January 2015 and 2016.
This is according to the latest Monster Employment Index (MEI) Singapore, a gauge of online job posting activities, recording the industries and occupations that show the highest and lowest growths in recruitment activity locally.
In February 2016, the Production/ Manufacturing, Automotive and Ancillary sector saw the sharpest growth in online hiring, registering 9% year-over-year. This is the sector’s first positive annual growth since December 2014.
The Hospitality sector registered -10% decline year-over-year in February, the lowest across all job sectors. This is followed closely by the Engineering, Construction and Real Estate sector at -9% decline year-over-year.
Amongst the occupational groups monitored by the Index, demands for Customer Service professionals remain the strongest, reporting a 2% year-over-year growth in online hiring. This is the only group in Singapore that reported positive growth between February 2015 and 2016.
Online demand for Software, Hardware and Telecom professionals saw the steepest drop at -19% year-over-year, falling further from -12% year-over-year reported between January 2015 and 2016.
“Singapore’s economy is still slowing down amidst the ensuing economic uncertainty globally. Many companies have either resorted to laying off their employees or freezing hiring activity altogether, resulting in the dip in hiring,” said Sanjay Modi, Managing Director of Monster.com (India, Middle East, Southeast Asia, Hong Kong).
“The Singapore Purchasing Manager Index fell from 49.0 in January 2016 to 48.5 in February, partly in due to the reduction in new export work, in turn resulting in the decline in employment in the sector. The upcoming Budget 2016 however, may be able to turn things around and is expected to bring in some relief to the local job market.”
The Monster Employment Index Singapore is a monthly gauge of online job posting activity, based on a real-time review of millions of employer job opportunities culled from a large representative selection of career websites and online job listings across Singapore. The Index does not reflect the trend of any one advertiser or source, but is an aggregate measure of the change in job listings across the industry.

—
About the Monster Employment Index
Launched in May 2014 with data collected since January 2011, the Monster Employment Index is a broad and comprehensive monthly analysis of online job posting activity in Singapore conducted by Monster India. Based on a real-time review of millions of employer job opportunities culled from a large, representative selection of online career outlets, including Monster Singapore, the Monster Employment Index presents a snapshot of employer online recruitment activity nationwide. Monster has taken due care in compiling and processing the data available from various sources for Monster Employment Index, but does not guarantee the accuracy, adequacy or completeness of any information and is not responsible for any errors or omissions or action / decision taken or for the results obtained from the use of such information.
About Monster Worldwide
Monster Worldwide, Inc. (NYSE: MWW), parent company of Monster, the premier global online employment solution for more than a decade, strives to inspire people to improve their lives. With a local presence in key markets in North America, Europe, and Asia, Monster works for everyone by connecting employers with quality job seekers at all levels and by providing personalized career advice to consumers globally. Through online media sites and services, Monster delivers vast, highly targeted audiences to advertisers. Monster Worldwide is a member of the S&P 500 index. To learn more about Monster’s industry-leading products and services, visit www.monster.com. More information about Monster Worldwide is available at http://about-monster.com/