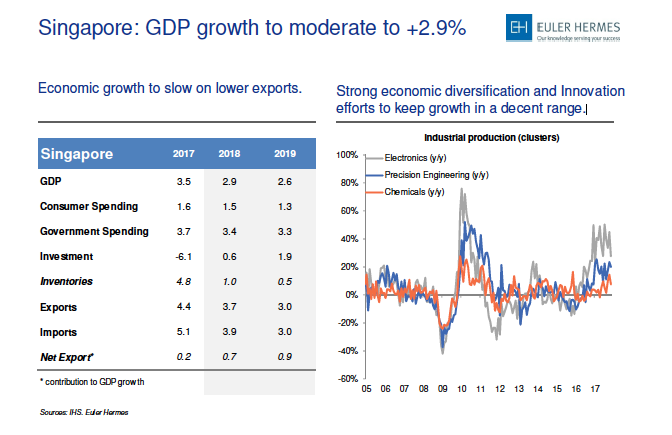 Singapore, which is viewed within the group of nations called the ‘Connectors’ in the Asia-Pacific region, will see a moderation to +2.9% of its gross domestic product (GDP) growth this year, saidEuler Hermes.

Euler Hermes is a credit insurance company that also offers risk monitoring services that provide valuable insight into the financial stability of companies around the world.

“GDP growth to moderate to +2.9%, economic growth to slow on lower exports,” said the report.

It also said strong economic diversification and innovation efforts will, however, keep growth of connector nations in a decent range.

Mahamoud Islam, Senior Economist for Asia at Euler Hermes: “There are three types of countries in the region: The Accelerators, the Stabilizers, and the Connectors. Stabilizers and Connectors will need to focus on reducing leverage to keep growth at a healthy pace.”

As part of the innovation drive, Singapore, as a connector is also on the lookout for new drivers of growth, said Euler Hermes in the report published yesterday on the Euler Hermes portal.

The report also suggested that countries like Singapore would benefit from Blockchain technology.

“Trade techs could offer a new engine of growth at the crossroads between finance and trade,” said the report.

It said Singapore’s smaller and more open economy is prone to adopt policies that would focus on averting financing risks stemming from high private debt and monetary tightening in advanced economies.

Read more on Singapore’s adaptability and what the ‘connector’ nations should further expect in 2018.Follow us on Social Media