In a talk in San Francisco last month, American billionaire Jim Rogers said that Singaporeans speak “bad English and bad Mandarin.” Rogers had been speaking at a Moneyshow San Francisco event entitled, “Where Are The Opportunities Today?” on 27 Aug when he made the comments.

Rogers has been living in Singapore for over a decade, since 2007, with his wife and two daughters. Although he described Singapore as “probably the most successful country in the world in the last 40 years…It’s done an extraordinary job,” he was less than flattering when it came to describing the way locals speak:

“What I didn’t know when I got there was [that] they [Singaporeans] speak bad English and bad Mandarin.”

Perhaps most offensively though, Rogers told a woman “You should go back,” when she asked him a question in heavily accented Singlish.

While several netizens blasted Rogers, some said that he was not wrong: 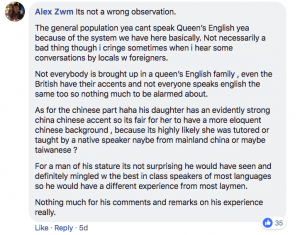 One netizen said that most Singaporeans actually have a good command of language, but use Singlish because it’s shorter and more convenient:

Those who agreed emphasized however that the ability to communicate is what is important: