The Independent News
Home News Featured News Singaporean PMET bullied by foreigners in his workplace and against local talent... 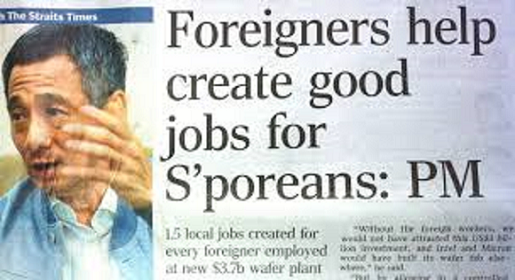 I felt the frustration in every one of you, and the agony you have faced in the endless wave of foreigners flooding into Singapore.

I know the issues you’re facing in your day to day interaction with the foreigners – the good and the not-so-good.

And the reason in which I understand how you feel? Almost 90% of the people I’m working with in my workplace are foreigners.

The government’s argument for the need of foreigners:

The government has long argued that without foreigners, Singapore will lose her competitiveness.

I find that statement partially true.

I would have argued instead – Without a sustainable population, Singapore will lose her competitiveness.

If there’s sufficient labor force in Singapore, Singapore will continue to prosper and grow

But why the government always stood by their dogmatic argument on the need for foreigners?

The reasons are simple and I’ll explain the rational to you.

The real reason for the need of foreigners

For a country to need foreigners, it only means that the country own population is declining.

And the reasons for the population decline are:

ESM Goh Chok Tong had acknowledged in 2009 that Singapore is experiencing a “brain drain” and the talent pyramid is being chipped away at the top. This is a challenge that needs to be solved urgently.

Although this is highlighted at the national level ages ago, did the government really attempt to solve this issue seriously? Is the government being transparent about the brain drain and understand the real reasons for Singaporean wanting to migrate out? Has the government been producing migrating statistics on a year to year basis and proof that the government is serious about tackling this issue?

I believe the answer to the above questions is no – The government is not serious to tackle the “brain drain”.

On a more sinister note: Does the government understands the issue, knows the reason why Singaporean migrates out and instead, make a conscious decision to do nothing to address this “brain drain”?

I call this a MUST for a family and this is always the long-term pursuit of happiness for a family.

Although the government has attempted to address the declining population issue by giving out baby bonus – to me, this is a short-term incentive.

Given the above, how can an ordinary family afford to raise a child adequately?

The real reason for the government to bring in foreigners is that the government has failed to resolve the actual reasons (point number 1 & 2) behind Singapore population decline.

Instead, the government is choosing the easiest way out and unleashed a loose policy for foreigners – because this best suits the government’s interest also.

This is a “population replacement” strategy adopted by the government and its ultimate intention is to replace you with foreigners.

Moreover, the government had conveniently ignores the side effects that accompanied with the influx of foreigners. These side effects are:

I have a special and intimate feeling on the bully and discrimination part, because I’ve been through that painful experience before. I was bullied and discriminated by foreigners in my own country.

Ask the government not to use short cut and urge the government to focus on the well-being of Singaporean, so that the social fabric can be weaved by the local population who is loyal to the country.

Remember: Only the local population will stay on with Singapore during a crisis, not a foreigner.

*Article first appeared on www.transitioning.org, a support site for the unemployed by Gilbert Goh