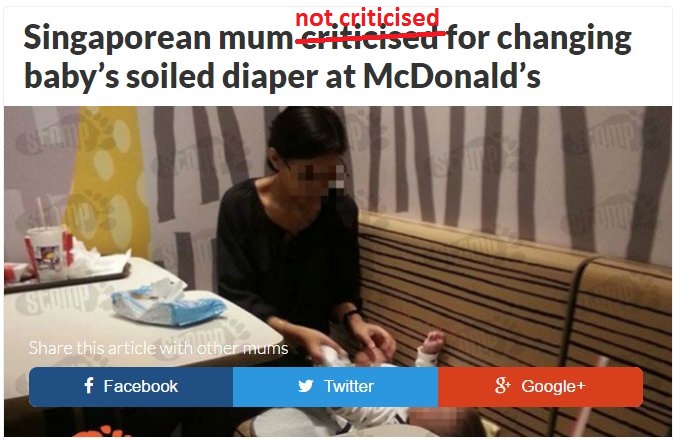 The Tickled Media’s publication, theAsianparent, recently published an article which criticised a Singaporean mother for changing her child’s soiled diaper in public at a McDonald’s restaurant. The article had referred to a report which originally appeared in STOMP where one of its contributors said that he took the picture because he “was disgusted at how inconsiderate the couple was” and because “they never considered that we were at the next table eating our burgers”. The incident allegedly happened at the McDonald’s at Tiong Bahru Plaza.
In referring to the STOMP article theAsianparent claimed that it went out and “collected some quotes from mums on their thoughts on this incident and what they feel should have been done in this situation.”
Several of the comments the writer said she collected, criticised the mother for changing the diaper in public. The title to their article, “Singaporean mum criticised for changing baby’s soiled diaper at McDonald’s”, also claimed that the woman’s action was disapproved.
The readers of the article on the website who signed in with their real Facebook however, disagreed that the woman should be criticised.