Singapore table tennis player who lost an eye, both legs, an arm and 3 fingers clinches gold at Asean Para Games 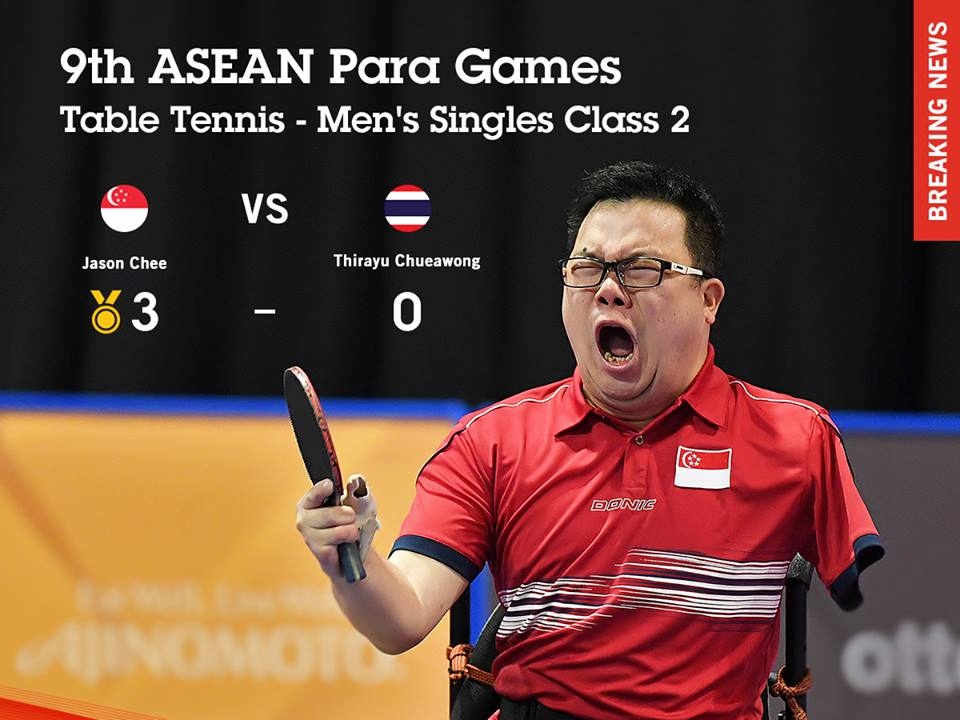 Table tennis player, Jason Chee, clinched first prize at the Asean Para Games on Thursday, bringing back gold and glory for Singapore. This is the first individual gold for the 34-year-old para athlete who won silver at the Games in 2015.

【JUST IN】It's a GOLD 🥇 for our TeamSG Paddler Jason Chee in the Men's Singles Class 2 event! What an inspiring display…

Chee lost both his legs, his left arm and three fingers on his right hand in an accident aboard a Republic of Singapore Navy warship in 2012. In April this year, he was diagnosed with choroidal melanoma – a type of eye cancer – after a tumor was found in his right eye. His right eye was removed in May 2017.

Defence Minister Dr Ng Eng Hen has spoken highly of Chee in the past, notably when he shared his admiration for Chee’s determination and “fighting spirit” in a Facebook post last month. He had said then:

“I spoke to Jason Chee to find out how he was coping after his surgery – his right eye had to be removed due to a rare cancer. I was concerned how this bad turn of events would affect him. But from his voice and demeanour, I could tell that Jason would not let yet another setback depress him. More than that, his fighting spirit was still strong as ever.

“After his surgery in May, he resumed training to win glory for Singapore in the ASEAN Para Games. With one eye, he has no depth perception and finds it much harder to hit the table tennis ball. But his coach, Mr Chia Chong Boon told him not to give up, and Jason is training hard to compete next month for the ASEAN Para Games in KL.

“Each time I talk to Jason, it’s to try to lift his spirits up, but invariably my spirit gets lifted instead. Jason’s ability to withstand all of life’s calamities, to press on, no matter how difficult the road and against seemingly insurmountable obstacles is an inspiration to all.

“Despite this, Jason still has a heart for others. When I asked him how his father was coping, he replied fine, because Jason has encouraged his father not to stay at home, but go out more often to mix with his friends. Our prayers and support go out to Jason and for his next match in KL – he is already a winner!”