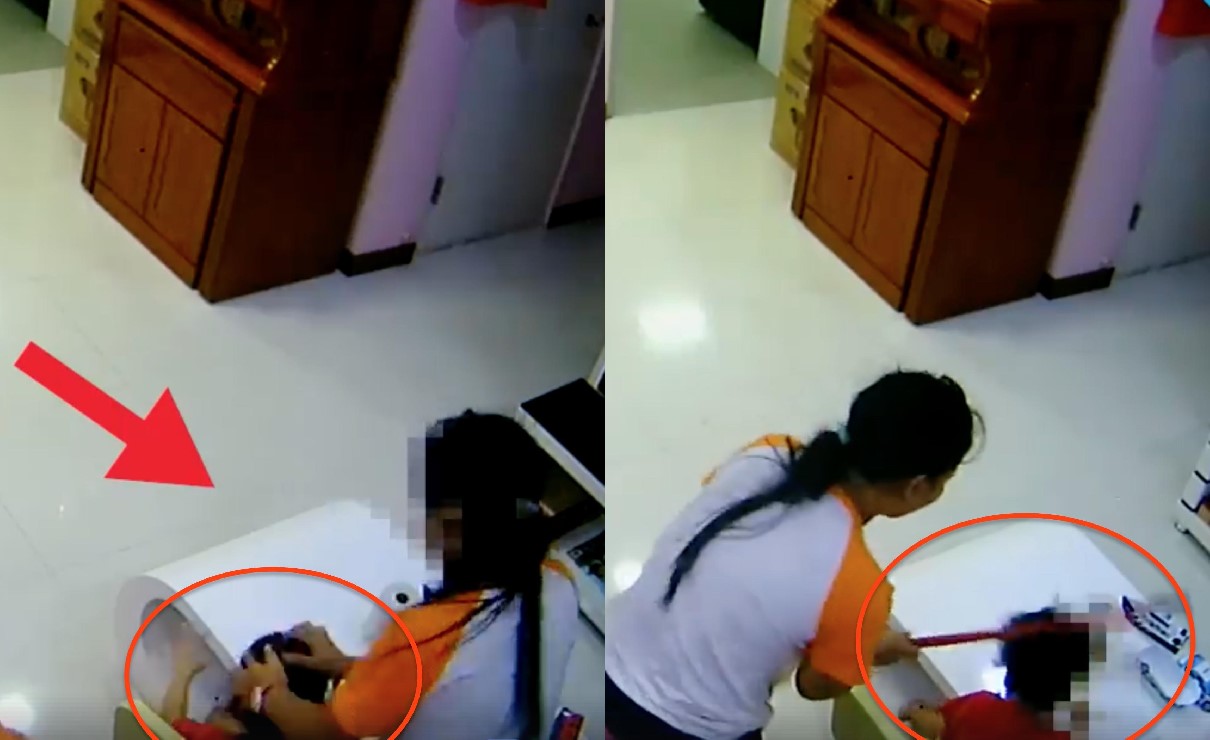 A foreign domestic helper in Singapore has been caught on camera violently abusing a five-year-old child. Surveillance camera footage captured by a CCTV camera installed in the home she was working in shows that the incident occurred on 19 Apr 2018, around 9pm.

In the video, the helper can be seen beating and slamming a young child’s head on a table before hitting the same child on the back of her head with a broomstick, while another child observes what is happening as she sits on a sofa:

Posted by Lianhe Wanbao 联合晚报 on Wednesday, 2 May 2018

According to the Chinese daily, the helper is a 27-year-old Burmese who had been working at this home for a few months. The girl she is seen hitting is a mere five years old. The child seated nearby is the victim’s six-year-old sister.

The children’s parents initially felt that the helper had a good attitude when they first employed her. Running a night market stall, the 63-year-old father and 44-year-old mother did not have very much time to interact with their children and so, employed the Burmese worker to help out.

The parents thought that the helper performed well enough and did not suspect any wrongdoing, until they spotted a bruise on the forehead of one of their daughters about two weeks ago.

The helper claimed that the child had sustained the injury when she had fallen off her bicycle. Believing her, the children’s mother gave the helper some ointment to apply to the injured child’s forehead.

It was only when the mother checked the CCTV footage to see if the helper really applied the ointment, that she discovered the horrific abuse her young children were allegedly going through. The mother shared that CCTV footage from the month of April showed the helper hitting both her children on a daily basis, with the abuse lasting anywhere between 10 minutes to more than an hour at a time.

CCTV footage from the month of April reportedly shows the helper using other objects like spoons, a TV remote control, and a pencil case to hit the children. In one instance, the helper struck one of the children across the face so hard with a spoon that the child’s nose started bleeding. Unmoved, the helper simply wiped off the blood and continued lashing out at the young girl.

In another instance, the helper grabbed one of the girls by her hair and slammed her head against the table. She reportedly did not stop her violent acts even when the children cried.

The girls’ mother has sent the helper back to the maid agency, besides lodging a police report. She told the Chinese daily: “The CCTV only had footage from the last 30 days. Who knows what she did to my daughters from January to March? I get angry just thinking about it.”