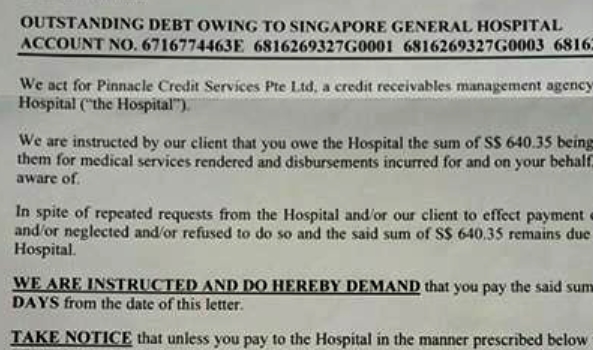 Social activist Gilbert Goh shared the notice of a patient of Singapore General Hospital (SGH) who was recently served by lawyers to pay-up the amount she owed the hospital. The lawyers were acting for a legal debt collection agency, which the hospital had appointed to recover the amount owed. They warned that legal actions would follow if the patient refused to pay within seven days from the date of the notice.

Gilbert said that the patient is a single woman and that she was still recovering from the illness the hospital treated her for. She is currently working part-time from home, earning $7 an hour.

The Straits Times yesterday reported that many patients were not following up even when red flags show up in health screenings.

“SingHealth, which runs six to eight screenings a year, says one in four people who were screened between July 2015 and the same month last year had not returned for a doctor’s follow-up after a year. Healthcare professionals say many people do not see their results as being serious enough to warrant a doctor’s visit, or do not want any medication. Some say they are too busy.” – ‘Many not following up after health screening‘ (Straits Times, Mar 27)

Vice President of the Diabetic Society of Singapore (DSS), Dr Kalpana Bhaskaran speaking to the newspaper said that “some are scared to go in case the doctor detects something abnormal, and they have to spend money to treat it.”

Socio-political commenter, Leong Sze Hian, writing on the topic in his blog pointed out that according to the Ministry of Health (MOH), the Average Hospital Inpatient Bill Size for Class C at the National Heart Centre was $24,465 at the 95th Percentile.

He asked if this meant 5 percent of patients at that hospital had a bill size of more than $24,465, and how affordable healthcare in Singapore is if patients in the lowest class ward had to pay such hefty sums for treatment.Follow us on Social Media