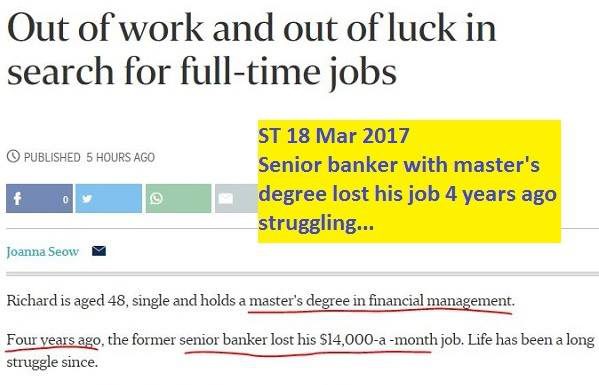 The Straits Times (ST) today reported on a 48-year-old man, which the newspaper identified only as Richard, who lost his job 4 years ago. ST reported the man as being single and holding a master’s degree in financial management.

The man worked as a senior banker before he lost his job, and he was earning $14,000 per month while he was a banker. Richard recounted that life has been a struggle for him since then. He worked in two small IT companies since then, but was retrenched after when the businesses went through a rough patch. In between searching for full- time work, he did odd jobs such as washing dishes in a restaurant and distributing flyers.

ST told Richard’s story to highlight how PMETs are taking longer to find permanent jobs, and how the growing pool of out-of-work PMETs are moving from one temporary job to another.

Richard is willing to work for $3,000 per month now, but employers appear reluctant to take their chances with that, or claim that he lacks work experience. Richard said how he applied for a caregiver role at one job fair, but was told that it required related experience.

As highly qualified PMETs from the financial sector are struggling to find proper employment, some financial institutions have been hiring foreign talents to fill their vacancies.

In May last year, the Bank of Singapore, a wholly-owned private banking subsidiary of Oversea Chinese Banking Corp, reported that it had appointed a new Chief Investment Officer (CIO). It was reported that the new CIO, Johan Jooste, is a South African and relocated from London to take up the new Singapore based role.

The bank said Mr Jooste held leadership and management positions with several
global financial institutions and that he holds a Bachelor of Commerce and Law from Nelson Mandela Metropolitan University and a Master’s degree in Economics from University of Johannesburg.