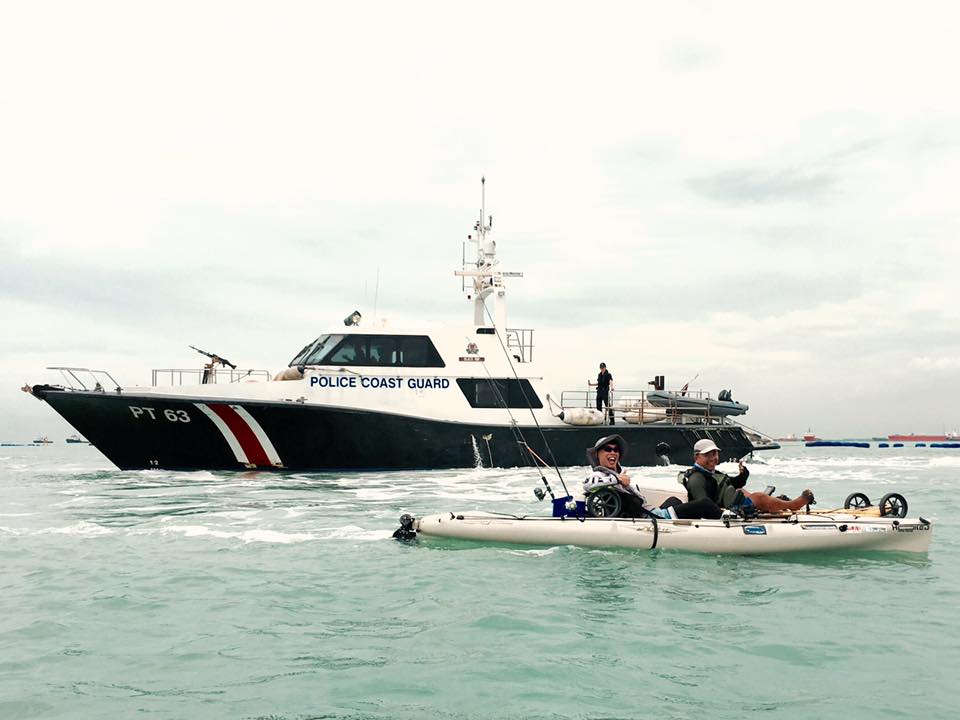 An avid kayaker, Merv Low, shared on Facebook his frustrations on restrictions surrounding ordinary Singaporean kayak-paddlers to safely launch and access Singapore’s beautiful southern islands.
The paddlers were trying to fish around Sentosa when the security guards at Sentosa Cove alerted the Maritime and Port Auhority of Singapore (MPA) to stop them from fishing around Sentosa.
The MPA officers who arrived soon after, responded politely when Merv told them that he is aware of maritime laws and that he was not breaking any. The officers advised Merv and his friends to stay closer to the island for the sake of their own safety to avoid the tidal stream nearby.
His friends decided to heed MPA’s advice and paddle to fish within the demarcated barrier, when they were stopped by a Sentosa Ranger. The Ranger told the team that no fishing was allowed within the demarcated safe area.
“The barriers were installed by Coast Guards to guard against illegal immigrants but Sentosa conveniently owned the sea between the island and the barriers,” Merv remarked.
The Coast Guards who were alerted by the Rangers came soon after, but the Guards empathised with the group of kayakers and did not create much trouble for the group as they had not broken any laws.
After much confusion, the group of kayakers decided to call it a day and paddle back to the lagoon in Sentosa when they were told by the Sentosa Ranger that the team was not allowed to land in the lagoon, and had to leave.
“I shook my head in disbelieve and told him that our cars are here. Where would he like us to go?” Merv asked.
The Ranger had thought that the group had paddled from “Jurong or somewhere else and decided to stop over at Sentosa beach, which is not allowed”. The Ranger further told Merv that “only kayaks from Sentosa Operators are allowed to launch there and they are not allowed to exit the lagoon”.
Merv wondered why he was being stopped from landing in the lagoon when there are so many inflatables kayaks, stand-up-paddlers and other paddlers from Singapore Paddlers Club who were launching every weekend from the same beach.
He had to stop himself from saying, “(because) I am not an Ang Moh, is it?”
Merv lamented that “Singaporean men can carry guns, fire a rocket launcher, drive an armour tank at 18-years-old and yet we are viewed as being incapable of taking care of ourselves, when we are older”.
“We are environmentally friendly, we do not litter the sea, we are enjoying and sharing a healthy lifestyle, a healthy sport and we are also a responsible bunch,” he said.
Merv described the turn of events as a “sad day for Singapore”.

Operation Sea Monkeys.Singaporean men can carry guns, fire a rocket launcher, drive an armour tank, at 18yo and yet we…
Posted by Merv Low on Wednesday, 10 February 2016