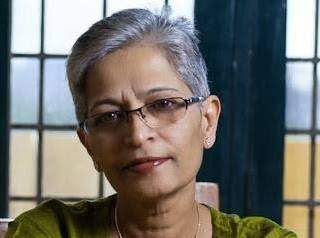 Fearless journalist, Gauri Lankesh was shot on Tuesday night in cold blood. She’d just gotten back to her home in Bengaluru, and was near the gate when unidentified men shot her. She succumbed to her injuries on the spot.

Lankesh was no ordinary woman. She is the most high profile journalist to have been killed in recent years and was laid to rest with full state honours. Her murder has sent shockwaves throughout the country and led to massive protests in many Indian cities including Bengaluru, Mumbai and Delhi.

Lankesh was known to be a feisty lady who wasn’t afraid to voice her opinions freely, no matter the consequences. She fought and she fought hard, openly criticizing the establishment and questioning the system.

Her weekly eponymous tabloid, Gauri Lankesh Patrike reflected her strong leftist views. She left no stone unturned as she took on the Hindu right-wing movement, insisting that India would greatly suffer and be destroyed by religious and majoritarian politics.

The journalist chased many other causes. For instance, she was openly sympathetic to Maoist rebels who have been battling the Indian government for many years. She even spoke passionately about the rights of Dalits in the country, who were previously shunned as untouchables for a long time.

She didn’t hide behind her social media posts, either. She often went ahead and shared unflattering memes of Prime Minister Narendra Modi and had recently praised local stand-up comedians for “successfully doing more than most to destroy the Modi myth”. She offered them her full support and said, “We are all with you together and we shall reclaim our secular India.”

Her newspaper often showcased her ideology and wasn’t objective. However, she never chose to hide her choices, calling herself a “journalist-activist” on Twitter.

She did end up in lots of trouble, though and had to deal with many defamation cases. Lankesh was convicted of defamation last year for her report on local BJP leaders and was out on bail, challenging the conviction at the time of her death. In an interview that took place after her conviction, she said, “My Constitution teaches me to be a secular citizen, not communal. It is my right to fight against these communal elements.”

Her murder has been widely condemned in India and has led to many prominent figures expressing shock on social media. Karnataka state’s Chief Minister Siddaramaiah called her death an “assassination on democracy”.

Many noted Indian journalists paid tribute to her hard work and condemned her assassination. “Journalism is nothing without courage. Democracy is nothing without dissent. You had plenty of both,” noted journalist Shekhar Gupta wrote on Twitter, saying she’ll live on as an inspiration.

Gauri Lankesh has left behind a rich legacy. The disturbing nature of her death poses a serious dilemma for the country’s journalists as they are forced to walk a tightrope between questioning what they see and guarding their own safety.

Many questions need to be answered. Who killed her and why? Where do we go from here? How do we continue to fight for what’s right and not succumb to fear? What if they come after our families? Is anyone really safe?

However, people like Gauri Lankesh and their work will not be in vain. Many will join the cause, fearlessly going after the system and chasing their ideals until the very end. May Gauri Lankesh continue to inspire, even in these difficult times and give others like her much-needed strength to carry on.Follow us on Social Media