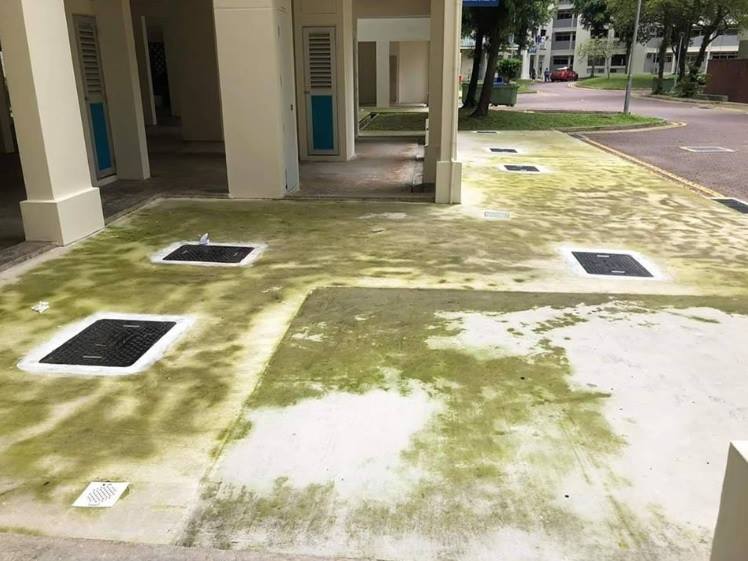 Sembawang Town Council has responded to viral photos showing algae covering the concrete pavements at the foot of a block in the Woodlands estate and has pinned the algae growth on “poor workmanship”.

The photos, showing heavy algae growth that almost fully covers the concrete pavement near Blk 872 Woodlands Street 81, has triggered swift backlash against the town council for not maintaining the cleanliness of the estate well.

In a response to the national broadsheet, a Sembawang Town Council spokesman acknowledged that there is algae growth affecting areas near blocks 870 to 882 and blocks 801, 802 and 804 near Republic Polytechnic, before pinning the poor state of the affected areas to “poor workmanship from the re-rendering of the concrete surface.”

Re-rendering is a process that involves the hacking of a concrete surface before fresh concrete is reapplied, in order to properly maintain concrete surfaces that are prone to natural deterioration over time.

Revealing that re-rendering works were last done between Oct 2017 and April this year, the town council spokesman said: “We have discussed with the contractor in charge of the re-rendering, and it has agreed to carry out rectification works.”

The representative said that the town council has asked the contractor to conduct surface washing more frequently and increase surface washing works from once a month to once every two weeks in the time before rectification works take place.

The town council has reportedly ordered workers to use anti-fungicidal chemicals to slow down algae growth in the meantime, as well.

https://theindependent.sg.sg/woodlands-residents-slam-town-council-for-filthy-dirty-estate-and-algae-covered-pavements/Follow us on Social Media