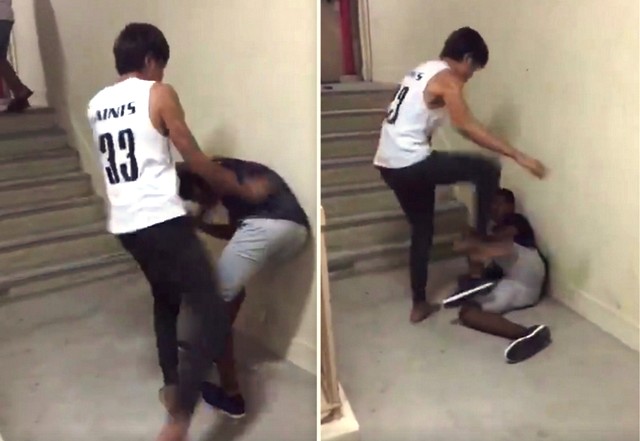 St Andrew’s Secondary School has confirmed that some of the boys shown in a video bullying another in a viral video are students from the school. The school principal said that the incident took place on 5 Nov and that they take all incidents of fighting seriously.

“(We) will continue to educate our students on anger management and appropriate behaviour,” she said and added that the school is working with the police in their investigation. The school is unable to comment further because of the ongoing police investigation.

As one of the bullies seemed to be wearing the basketball jersey of the school, netizens suspected that the bullies were from Saint Andrew’s Secondary School.

The mother of the bullied boy has lodged a complaint with the Police and the Police have confirmed that they had identified the youths involved in the video and were investigating them.

In a statement the Police said: “The police take a stern view of lawless and violent public behaviour which could threaten the sense of safety and security in the community. Any person who resorts to violence and riotous behaviour will be dealt with severely, in accordance with the law.”

Facebook user Bhai Hafiz Angullia video clip of a group boys bullying a boy went viral yesterday. The group mercilessly attacked the boy who kept screamed in pain. Towards the end of the video clip, a young man wearing a red hoodie jumped and stomped the boy on the face while he was floored from the earlier punches and kicks.

Many commenters expressed outrage and said that the relevant authorities should make an example of the bullies.Follow us on Social Media