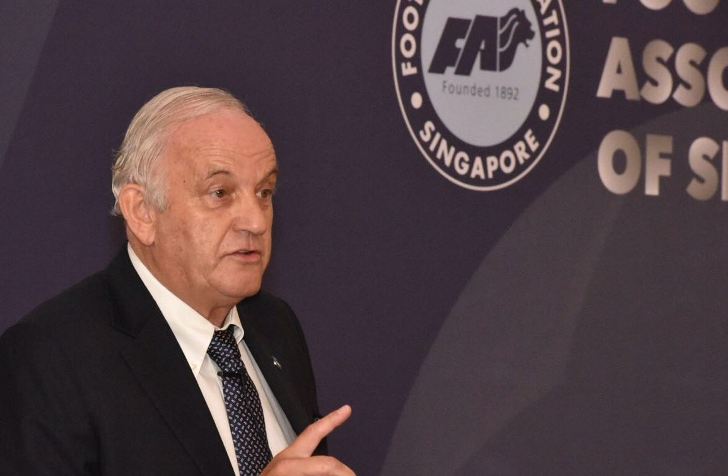 By Suresh Nair
LISTENING to Michel Sablon present his vision for grassroots football in Singapore was like an awe-inspiring Pied Piper of Hamelin rallying to get the basics absolutely right before scaling greater heights.
He promised, in a mesmerising-way with his magic flute to, slowly but surely, develop a “Singapore way of playing” at Monday’s special FAS (Football Association of Singapore) presentation on “The Future of Singapore Football” at The Fullerton Hotel.
The highly-credentialed Sablon is a footballing enchanter, who’s probably the best  foreign“bola” brains I’ve met in over three decades. And Singapore’s Technical Director is a genuine world-class act, who is credited with helping to guide his native Belgium all the way to No. 2 (just behind Argentina) in the FIFA world rankings.
After spending close to a year here, assessing Singaporean football at all levels, focusing particularly on youth, he candidly outlined, over 150 minutes (that’s close to two football matches!)  the structural framework needed to fire up the grassroots with the longer-term goal of producing regional-class players.
No short cuts in his books. The 68-year-old, a decorated member of the Belgian coaching team at the World Cup Finals in Mexico (1986), Italy (1990) and the United States (1994), detailed his Made-in-Singapore plan to instill this development philosophy over 10 facets including physical preparation; utilising sports science and medicine; working with stakeholders, management and facilities; building the Young Lions and under-21 national squads as well as tapping into school competitions.
The others are in coaches’ education; building talent pools for clubs, national teams and national football academies (NFA); organising Centre of Excellence (COE) competitions; elite player development in junior COE, NFA and goalkeeping areas; and grassroots strategies.
TECHNICAL ABILITY
Striking his flute seriously, Sablon stressed the need for the Singaporean younger generation to have improved access to facilities and to learn teamwork and belief, while focusing on technical ability. End of the day, Singapore must evolve its own unique, attacking style, like a fiery red-dot standing out from the crowd.
“I bring my experience (from Belgium) with me to change the Singapore footballing landscape,” he said. “We have to make a Singapore way of playing football and that will take time, it will take years, and even tears, and whatever it is, but that’s the only way.”
He talks with a no-nonsense approach. He says it took eight years for his vision to be fully realised in Belgium, and it will take “at least five or six years” to see some positive results in Singapore.
His formula is to get to the grassroots. Starting with children from the age of six, he labelled the years between 10 and 13 as the “golden age” for children to accelerate their development and hone the skills that can translate to the national team. And the key focus on identifying many more qualified coaches, managers and administrators to assist in their development.
‘GOLDEN GENERATION’
“We need it. We need children playing football,” he said. “The grassroots idea (I’m presenting) isn’t new, but the vision is new. We want to develop a generation that play in a unique Singaporean-style in five or six years. My aim is to have a system that they’re comfortable with and they can develop themselves, with all the ability and talent they have.”
Sablon’s last stint as the National Technical Director of the Royal Belgian Football Federation saw him introduce ‘La vision de formation de l’URBSFA’  – a 10-year master plan that led to a “Golden Generation” of players that include the likes of Eden Hazard, Thomas Vermaelen, Romelu Lukaku and Vincent Kompany.
Football Association of Singapore (FAS) President Zainudin Nordin said: “Michel is one of the most renowned and successful Technical Directors in the world today, and his vision and hard work in revamping the youth development system in Belgium have been acknowledged as a key factor in the rise and success of Belgian football in recent years.
“[He] brings with him great wealth of international experience, ability and track record in mentoring and grooming youth players and coaches, and his experience at the FIFA World Cup and other high-profile competitions will benefit our various teams preparing for their international assignments.”
Expecting instant results, Sablon says, is a pipe dream, not even by the legendary Pied Piper standard. But with consistently good groundwork at the grassroots, there’s bright light at the end of the tunnel.   “We will show Singaporeans that we can play football and compete regionally,” he said. “Will we win? Maybe not. But we’ll show we’re learning to play football. A football that can be identified as a Singaporean way of playing football.”
Sablon also spoke of the similarities and differences between Belgium and Singapore, and what it would take to improve the country’s fortunes when it came to nurturing youth.
“Youth development is a long-term project and takes time to yield results,” he said. “Belgium and Singapore are countries with a small population size and while the challenges and constraints are, to some extent, different, I am confident in building on the success of FAS’ youth development system,” he said.
In Sablon’s spiritual words, a “fast-passing offensive football based on a winning spirit”, based on the 4-3-3 formation. The plan is to instill one holding midfielder, who is flanked by two offensive-minded players. A lone striker will spearhead the frontline, supported by two wide players.
For newly-appointed national coach V. Sundramoorthy, he couldn’t have found a wiser world-class Pied Piper in Sablon to help guide the Lions, with a refreshing musical footballing philosophy, to rise with a Singapore-styled “Golden Generation” of younger players.
—
Suresh Nair is a Singapore-based journalist, who is a (Asian Football Confederation) AFC-Licenced coach.
—
Republished with permission from Sports247.Follow us on Social Media