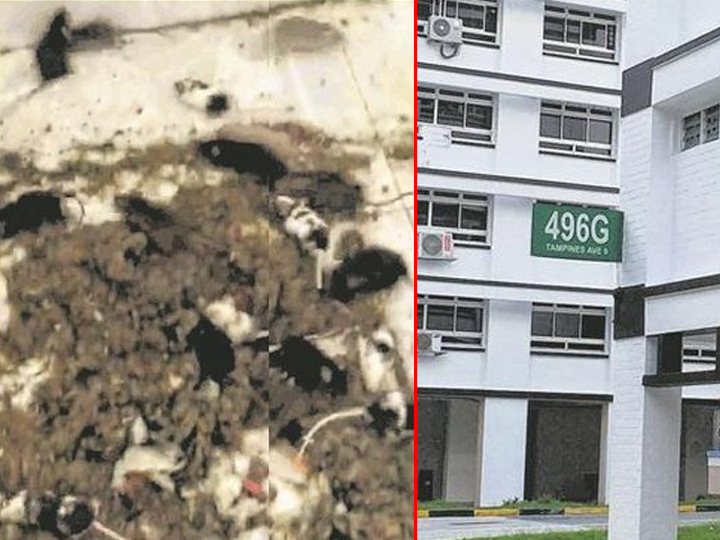 In December 2016, Facebook user ‎Farhan Suhaili‎ shared a video with Tampines Town Council (TTC) complaining that he caught a rat at Blk 496G Tampines Ave 9 Level 10. He said that he reported the rat problem to TTC but they never took any action, and even suggested that it might be hamster. The town council told him that another resident in the block kept many hamsters and that some are now on the loose.

Farhan said that he bought mouse traps himself and caught it within a day. He said that it is the second time rats have been found at level 10.

Rat caught at Blk 496G Tampines Ave 9 Level 10. Reported to Town Council but no action taken. Bought mouse traps myself and caught it within a day. Second time rats found at level 10. Tampines Town Council you better do something about this.

Another Facebook user Suzanne Sum Sock Peng suggested that residents who leave their rubbish at the lift landing area may be the reason why rats are found in the higher floors of the apartment block. She shared a picture of residents leaving rubbish at the 11th floor lift landing.

TTC responded to Farhan on Facebook and said that they have engaged their pest control team to check and comb the area again. They further promised to get their property officer to follow up with the resident’s concern directly.

But Suzanne’s suggestion about rubbish at the lift landing area for the rat infestation in the block may be wrong. So could TTC’s that the rodent could actually be a hamster – one of the many reared by a neighbour.

The resident in the block was not rearing hamsters, but rats!

The Chinese daily reported that a man staying in Block 496G had over 200 rats in his apartment. What’s worse is, the rats are not caged up, but allowed to run wild in the house. The man said he started with 3 rats, but that they soon multiplied. He also had 23 rabbits in the flat.

The resident is a Chinese man in his 40s. He used to live in the flat with his mother, but his mother has since moved out.

TTC took action after several residents living in the block complained about rats problem and about a stench coming from the unit in which the rats were reared. The pest control company contracted by TTC said that they were shocked to see so many rats running around in the apartment and hiding behind furnitures like cupboards. The entire unit was littered with rat faeces.

This could be the first case of a resident rearing hundreds of rats in an HDB flat in the history of Singapore.Follow us on Social Media