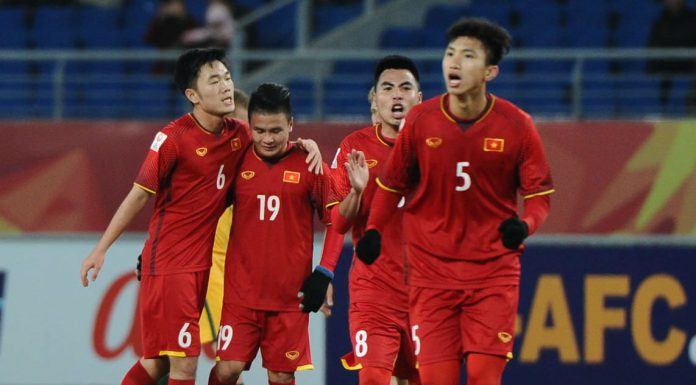 THEY truly played with balls of fire. Vietnam went absolutely wild and a little sub-continent of Asean celebrated as the red-hot country qualified for the Asian Football Confederation (AFC) Under 23 final for the first time.

No one ever gave them a ghost of a chance. But with a 4-3 penalty shootout win after added time locked at 2-2, the Red Devils (Vietnam’s nickname) once again surprised Asian football fans, becoming the first South-east Asian country to enter the final of the championship.

“There’s nothing to doubt, they are our warriors,” Vietnam’s South Korean coach Park Hang-Seo said after the victory in Changzhou, China. “Before the match, we promised ourselves we won’t let the Vietnamese fans down. And we made it.”

Even Qatar’s Brazilian coach Felix Sanchez praised: “Vietnam deserves the final. They have proven that they are a highly capable team. They did they best to win and I send them my congratulations.”

Prime Minister Nguyen Xuan Phuc personally called the team to congratulate them, saying this “historic win is very meaningful for the country”. He said it was a “great success” and asked the Ministry of Culture, Sports and Tourism to provide a worthy bonus for coach Park, players and officials.

Vietnam will now face Uzbekistan on January 27 after the latter defeated South Korea 4-1 at extra time on Tuesday.

During the sudden-death penalty-kicks, defender Vũ Văn Thanh was the last player to take the crucial make-or-break kick. Millions of people in Vietnam held their breath and burst into tears of happiness when he succeeded.

Thanh just fell on his knees and cried. Players cried, supporters cried and, throughout Vietnam, the celebrations were outrageously wild as people hugged each other and cheered as they began the second instant-flag parade in a week through cities and towns.

“It was difficult to describe my feelings at present. I’m really happy with the result,” said penalty-kick hero Thanh, in an interview with international media.

In my books, I must confess I’ve always admired the red-hot-spirited Vietnamese as a very proud football people who are fiercely competitive every time they take to the field. But strangely, at a continental level, few would argue that they are presently anything more than a mid-level team.

Now it’s a new-look Vietnam, who must rank as favourites for the year-end Asean Suzuki Cup. Simply because Vietnam has an impressive squad averaging 20.7 years of age. That’s younger than South Korea (21.4 years average) and Uzbekistan (20.9 years average), although it is Qatar (19.3 years average) who can lay claim to being the most youthful of the semi-finalists.

The Qatari team, which had won all its previous matches in the tournament, opened the scoreboard with a successful penalty in the first half. Vietnam, however, equalised halfway through the second half with a goal from Nguyen Quang Hai, the hero of the team’s victory over Australia in the group stage.

The last few minutes of the second half saw Qatar take the lead, before Hai once again scored the equaliser for Vietnam to bring the match to extra time, which ended goalless.

In the penalty shootout, Vietnam emerged victorious after successfully converting four out of its five penalty kicks, while goalkeeper Bui Tien Dung managed to save two penalties from Qatar.

Before the match, Vietnam’s coach Park was hopeful but cautious, with Qatar widely seen as the stronger team. “Though we are aware that it’s going to be a hard game, we still have a great belief that we can win. Belief is what has brought us here,” he says.

“We fight for Vietnamese supporters, for Vietnam. I think the fighting spirit is one of the most best weapons of Vietnam (team),” said Vietnam captain Luong Xuan Truong ahead of the semi-final. “I think the tactics from the head coaching staff are good preparations of VFF (Vietnam Football Federation). And the solidarity of the team is also the team’s greatest strength.”

Earlier, Vietnam also became the first South-east Asian team to achieve a group stage victory by defeating Australia, and one of the first teams from the region to reach the quarterfinals together with Malaysia.

More big cheers for Vietnam, too. They have qualified for the AFC Women’s Asian Cup, the world’s oldest senior women’s continental competition, to be played in Jordan in April.

The secret to an overall Vietnamese revival falls on the shoulder of Park Hang-Seo, the soft-spoken coach who was one of the key assistants to Holland maestro Guus Hiddink as South Korea reached the semi-final of the 2002 FIFA World Cup. Journalists in Seoul say that Hiddink’s legendary results could perhaps not have been as achievable without Park.

Mind you, an extraordinary total of 27 managers have taken charge of Vietnam’s national team since 1991. But Park is finding the big results with the national team even qualifying for the 2019 Asian Cup Finals.

Beware (Singapore coaches) V. Sundramoorthy and Fandi Ahmad: Park is also eyeing the 2018 AFF Suzuki Cup end of this year. After reaching the semi-finals in the last two editions, the pressure will be on him to deliver the country its first regional title since 2008.

For the moment, come Saturday, it is the solemn duty of every Asean fan, from Myanmar to Malaysia, Indonesia to Brunei, Singapore to Laos to cheer on the Red Devils in the final match against Uzbekistan. If it’s a matter of heads and hearts, Vietnam will be rocking to prove that Asean football is not in the doldrums.

Indeed, the Football Association of Singapore (FAS) can take spirited pointers from the never-say-die, super fit Vietnamese, who play with their red flags so close to their chests.

Vietnam is on a rocket high.

This same team qualified for the 2017 World Cup Under 21 Finals and now have risen to be Asean’s first-ever finalist in the AFC Under 23 Tournament.

Yes, dare I repeat, Vietnam really plays with fire in the belly.

Suresh Nair is a Singapore-based sports journalist who has always admired the red-hot-spirited Vietnamese as a very proud football people, always fiercely competitive every time they take to the field.Follow us on Social Media