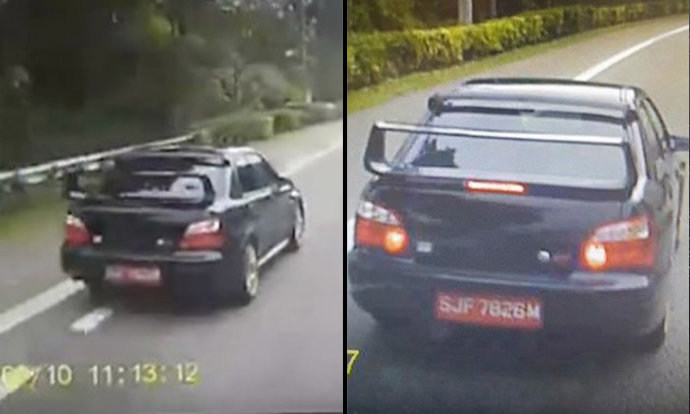 The driver of a Subaru vehicle abruptly stopped his car in the middle of an expressway causing two lorries to collide with each other, just because one of the lorry drivers signalled to him that he was driving dangerously.

The lorry driver explained that  the driver of Subaru SJF7826M abruptly cut into his lane, so he flashed his lorry’s high-beam to signal that the car driver should be more careful.

The Subaru driver instead got upset and jam braked his vehicle, causing the lorry driver to brake so hard until there was smoke from his back wheel. He managed to stop is vehicle from colliding into the Subaru, but not before another lorry hit him from the back. After the two lorries collided, the Subaru just drove off.

Sharing his dashcam video on the Facebook page Roads.sg, the lorry driver said: ”
This video is to serve as evidence that you have caused this accident and a police report has been made. Both lorries will claim from you for your road rage action and TP will follow up with you for prosecution of dangerous driving and road rage.”