The Independent Singapore News
Home News Featured News RADM Chew says he left LTA so to as "challenge" himself "in... 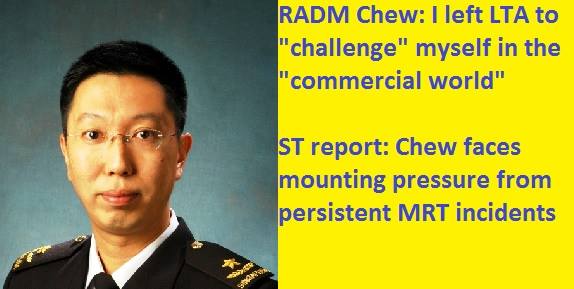 RADM Chew Men Leong, a former Navy Chief, gave an interview to a ST Marine’s internal magazine, Onward, last month (Apr 2017). In the interview, he explained why he left the public service. He said he wanted to “challenge” himself and decided to pursue this “in the commercial world”.

“The past few decades was indeed been exciting and fulfilling. I have again decided to continually challenge myself and to pursue my career in the commercial world,” he said.

It is debatable if ST Marine, the company he is now with, can truly be considered a genuine commercial company since it is govt-linked.

In any case, ST reported a slightly different reason why Chew decided to resign from LTA as its chief barely 2 years into the job to join ST Marine as its Dty President at the end of last year.

During his term as LTA Chief, he grappled with major MRT breakdowns, including the worst one in the MRT’s history on 7 Jul 2015 and another in Apr 2016 that crippled three MRT lines and an LRT line simultaneously.

Other incidents faced by Chew included the public outcry over the “secretive” returning of 26 defective trains to China for repairs. The incident was uncovered by a Hong Kong news team who tailed a night convoy of the defective Chinese trains from Bishan to Jurong Port, as the trains were prepared to be loaded to a ship bound for Qingdao, China.

In the interview, he was also asked why he chose to join ST Marine despite the many other commercial companies out there.

He said that ST Marine has made great strides in supporting the growth and transformation of the Singapore’s navy over the last five decades.

“Almost every vessel the RSN had and continue to hold in its fleet were built and/or maintained by ST Marine,” he added.

“Now adding onto that list would be the Littoral Mission Vessel, a programme close to heart that I have worked on in my final year with the RSN (as Chief of Navy).”

“I am glad to come right back, to work with committed and capable ST Marine team and continue with the vital work of shipbuilding and developing new naval capabilities to bring the RSN and by extension the Singapore Arm Forces (SAF), to its next bound of attainment to keep Singapore and its waters safe and secure.”

“ST Marine not only brings me right back to the defence and marine world, and also rather interestingly, back to environmental domain,” he said.

RADM Chew, of course, would now be working as a vendor closely with his former subordinate and now the current Chief of Navy, RADM Lai Chung Han.