Putrajaya urged to save Malaysian on Singapore death row 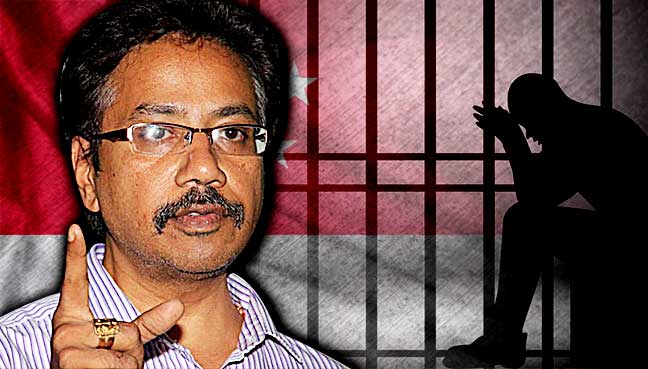 The argument put forward by activist groups in Singapore, led by lawyer M Ravi, is that core elements involving prevention and protection of right of life were ignored.

PETALING JAYA: Hindraf has come out in support of the call to have a Malaysian on death row in Singapore be given a reprieve.

Hindraf chairman P Waytha Moorthy also urged Putrajaya to intervene and “ensure that a Malaysian life is not short-lived or falls prey to antics of Singapore without having an opportunity to preserve their life”.

“Singapore with its statutory presumption has failed to do what is necessary and in line with customary international law, where a notion of prevention is an important part of protection of the right to life.

“They have an obligation to provide and facilitate this right including the duties to take reasonable measures to prevent such capital punishment rather than relying on a slapstick statutory presumption,” he said in a statement released today.

Waytha was referring to the case of Prabagaran Srivijayan, 29, who is on death row in the island republic and is set to be executed in a few weeks.

He was convicted in 2012 after drugs were found in the car he was driving to enter Singapore.

According to Waytha, Prabagaran had during the trial claimed that he did not know of the existence of the drugs in the car, which he said he had borrowed from a man called Nathan.

“During investigations, he had also positively identified Nathan and another man Balu from photographs shown to him by the Singapore police but for unknown reasons the Singapore authorities failed to seek their Malaysian counterpart’s assistance to secure the arrest of Nathan and Balu,” Waytha said.

He added that the Singapore Court of Appeal had rejected Prabagaran’s appeal based on circumstantial evidence and after having failed to note that material witnesses were not produced in court by the prosecution in the original trial.

Meanwhile, it was reported yesterday that a prominent Singaporean lawyer and two of his Malaysian counterparts are racing against the clock to save Prabagaran’s life.

Both Latheefa and Surendran are members of PKR. Surendran is also the Padang Serai MP.

According to Singapore website The Independent, the Malaysian lawyers may file for a judicial review in the Kuala Lumpur High Court for an order to compel Putrajaya to file an immediate complaint at the International Court of Justice (ICJ).

“The argument put forward by activist groups in Singapore, led by lawyer Ravi, is that the core elements involving prevention and protection of right of life are ignored.

In contrast, statutory presumptions are prioritised without affording a prompt, thorough and effective investigation and securing all relevant evidence concerning the event to prevent a violation of the right of life for Prabagaran,” Waytha, who is a former deputy minister in the prime minister’s department, said.

Waytha added that Malaysia, like Singapore, are signatories to bilateral and multilateral agreements such as the International Drug Control Conventions of 1961, 1971 & 1988 which allows the infringed party to raise the grievances for their own citizens.

“These treaties envisage reference of disputes to the ICJ that opens a door for the Malaysian government to bring forth a case against Singapore when it involves the Malaysian citizen as it is reflected in Article 36 in the statute of ICJ,” he said.

Meanwhile, Waytha noted that almost 70% of the prisoners on death row in Singapore are Malaysians.

—
Republished with permission from Free Malaysia Today.Follow us on Social Media