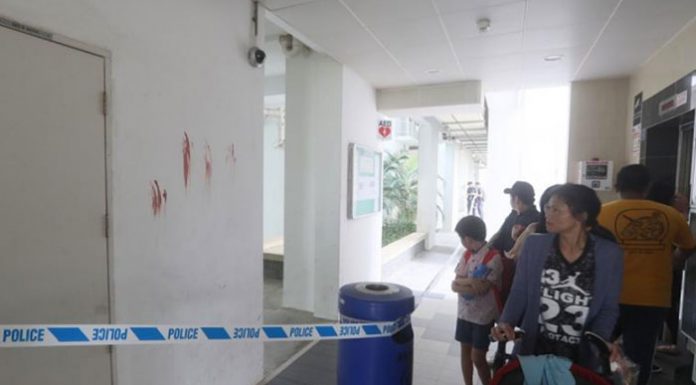 The mysterious appearance of several bloody hand prints and blood stains on the floor of a HDB void deck at Block 672D Edgefield Plains last Sunday has alarmed residents, even as police investigations are ongoing.

One resident, 48-year-old Xie Xiaolin, told the Chinese daily that she saw the disturbing scene when her neighbour told her that many police officers were crowding the block’s void deck: “The neighbour told me that there were some bloody palm prints found on the ground floor lift lobby. Nobody knows who left them or what happened, but it looks horrifying.”

The area was later cordoned off by officers who inspected the 10 hand prints left on the walls of the block’s lift lobby as well as on a pillar in the void deck. Reporters at the scene noted that the hand prints were smeared in a downward direction, suggesting that the person who left the bloody marks had been dragging their hands along the wall.

The blood stains that were discovered near a drain are believed to have been left by the same person.

38-year-old cleaner Rasel told the Chinese daily that he did not see the blood when he cleaned the area around 7.20am that morning. He revealed: “When I was cleaning, I found two or three broken glass shards on the floor, but there wasn’t any blood on them, I threw them into the rubbish chute at the back and went on to the multi-storey carpark at the side to clean. I did not see any bloody palm prints at the time.”

Even though the cordon was subsequently lifted, a police spokesperson confirmed to reporters that a report has been filed and that investigations are ongoing.Follow us on Social Media