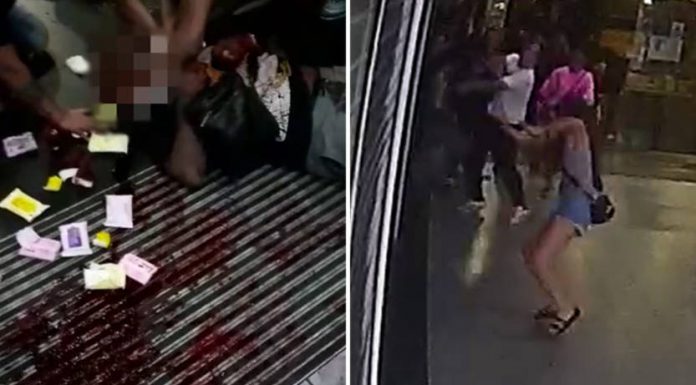 Surveillance camera footage show a group of people approaching the victim and striking him after he steps off the escalator. They continue raining blows on the victim as he collapses in front of the building's glass doors

A pub brawl turned into murder after six men and two women between the ages of 22 and 27 assaulted a 31-year-old man at Orchard Towers on Tuesday (2 July) morning, leading to the man’s death. The case has been classified as murder.

Videos circulating online shows paramedic performing CPR and the bloodied victim lying on the blood-stained floor. One of two men surrounding the victim can be heard repeatedly asking the victim to “hang in there”.

Shopkeepers at Orchard Towers who spoke to the national broadsheet reported that they heard shouting and fighting in the wee hours of the morning, near the vicinity of the Naughty Girl Club at the complex. One eyewitness said that the fight began at the club and spilled out into the first floor.

The publication saw surveillance camera footage showing a gang of men and women approaching the victim and striking him after he steps off the escalator. The group continue raining blows on the victim before he collapsed in front of the building’s glass doors.

The Chinese daily has reported that the victim is Singaporean Satheesh Noel, a married father of a five-year-old daughter who works as a mechanic.

“After he left the company, we didn’t speak much but I know he got married and had a five-year-old daughter. When I heard the news of the murder, I didn’t know it was him until my friends told me. I am sad and am sorry for his family.”

The Chinese daily reported that one of the assailants who approached Mr Satheesh was brandishing a weapon before using the weapon to threaten the victim, who was forced backwards.

One of the assailants reportedly slit Mr Satheesh’s throat with a knife before the group fled, leaving the victim staggering before he collapsed at the entrance of the complex.

The Singapore Police Force (SPF) received a call for assistance at Orchard Towers at 6.25am and found the victim lying motionless on the ground. He was was conveyed unconscious to Tan Tock Seng Hospital, where he was pronounced dead at 7.25am.

SPF has since arrested the suspects. Six men and one woman were for murder with common intention, which carries the death penalty, while the remaining suspect is still being investigated.

Man dies from injuries after brawl at Orchard Towers, 8 men and women arrested for murder

Man dies from injuries after brawl at Orchard Towers, 8 men and women arrested for murder https://bit.ly/2J8C63j