Singapore — The Progress Singapore Party’s Kumaran Pillai has raised an issue that has plagued the people in Kebun Baru for years — rat infestation.

Sharing an image of a dead rodent in a drain, the PSP candidate for the new Single-Member Constituency wrote: “Major rat investation at Block 257, Kebun Baru.”

“Residents concerned about it and have been complaining for many years. NOT RESOLVED!,” he wrote in a Facebook post on Wednesday (July 1).

According to the National Environment Agency (NEA), rodents thrive where food, water  and shelter are readily available. In urban environments like Singapore, poorly-managed bin centres and refuse chutes provide conducive conditions for rodents to feed and nest. The urine and droppings of rodents, as well as the fleas on their bodies, may transmit diseases.

In walking the ground in the SMC, Mr Kumaran has set aside time for his own Meet The  People Sessions (MPS) daily from 8 am to 10 am from July 1 to July 8.

He said: “My humble makeshift Meet the People Session at the doorstep of Mayflower market. Met several people, listened to their stories and have a greater understanding of what this district needs. Some of the problems have been highlighted to the incumbent MP years ago and yet remain unresolved.”

Those online who are residents of Kebun Baru commented on Mr Kumaran’s post and added they had been suffering from similar issues during the last MP’s 5-year term. Others complained about the many pigeons and mosquitoes in the area. 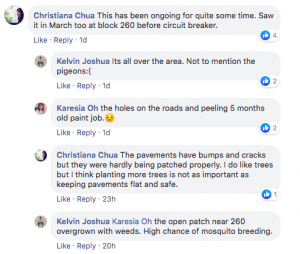 One netizen, Mr Kelvin Joshua, wrote that he had met Mr Kumaran and that he noticed that he was a down-to-earth person and that he cared. Mr Joshua urged people to make their vote count.

Mr Kumaran will be going up against the People’s Action Party’s Henry Kwek in the SMC. /TISGFollow us on Social Media