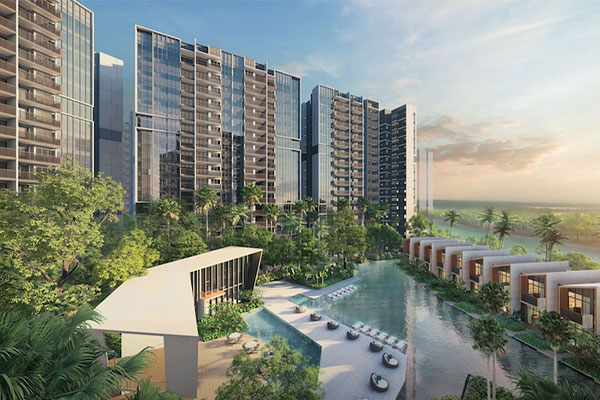 The flash estimates are compiled based on transaction prices given in contracts submitted for stamp duty payment and data on units sold by developers up till mid-September. The statistics will be updated on 26 October 2018 when URA releases its full set of real estate statistics for 3rd Quarter 2018. Past data have shown that the difference between the quarterly price changes indicated by the flash estimate and the actual price changes could be significant when the change is small. URA advised the public to interpret the property price index flash estimates with caution.

“Based on flash estimates, the URA’s private residential property price index rose 0.5% in 3Q18, a significant moderation from the 3.4% rise in the previous quarter.

This shows that the cooling measures that took effect from 6 July are having an effect on slowing price growth in the private home market. The changes in the price indices for the different market segments between 2Q and 3Q18 are tabulated below:

The landed segment was more resilient in 3Q18, with the index rising 1.7%. Landed property prices corrected the most between 3Q13 and 2Q17, which has drawn buyers to this market segment. In spite of having risen in the past year, prices of landed homes are still seen as relatively attractive by many buyers which has led to transactions at firm prices.

Among the non-landed segment, the index for CCR registered the highest increase of 1.2%. Compared to RCR and OCR, CCR had the least new launches in 3Q18, i.e. 8 St. Thomas which has a high median price of $3,226 psf. Consequently most prime district buyers had to explore opportunities in the secondary market, which accounted for 76% of CCR transactions in 3Q18 (based on caveats in URA Realis to-date), driving up secondary market median price from $1,838 psf in 2Q18 to $1,919 psf in the third quarter.

The index for non-landed homes in OCR inched up a marginal 0.1%, indicative of prices remaining flat in the third quarter. New launches in 3Q18 at affordable moderate pricing contributed to the price stability. Riverfront Residences, which had a median price of $1,309 psf, and accounted for about 72% of new sale transactions in OCR, had a significant impact on OCR prices in 3Q18.

Prices for non-landed homes in RCR retreated in 3Q18 as shown by the -0.8% decrease in the index. Pricing was driven mainly by the primary market which accounted for about 74% of transactions in RCR. The third quarter saw launches at lower prices and more new sale projects recording sales at lower prices. In 2Q18, three projects ie The Verandah Residences, Margaret Ville and Amber 45, were launched at median prices above $1,800 psf while launches in 3Q18 were below that price level. Out of 18 new sale projects that had transactions in 2Q18 and 3Q18, 72% of them recorded lower per square foot prices. Consequently, median prices of new non-landed homes in RCR fell from $1,885 psf in 2Q18 to $1,706 psf in 3Q18.

A trend of price moderation can be seen in 3Q18 due to the effects of the cooling measures that were imposed in early July. The measures have arrested price increases in existing new projects, moderated new launch prices and tempered asking prices in the resale market as well. We can expect this trend to continue with price increases remaining low key or flattening out in the next few quarters.”

“Based on the preliminary estimates released by the URA for Q3 2018, the private residential property index increased by 0.5% to 149.7, compared to the 3.4% increase in the previous quarter. This is a clear indicator that the cooling measures which took effect on 6 July 2018 have managed to curtail the exuberance in the market.

Nonetheless, prices in the CCR still registered a healthy 1.2% increase, while prices in the RCR have bucked the trend to register a decline of 0.8%. There has been anecdotal evidence that some previously launched residential projects has softened slightly on their pricing in order to move units.

Nevertheless, CBRE maintains a 8-10% overall increase for the property price index (PPI) in 2018, on the back of upcoming launches acquired at higher land costs. While prices in psf are expected to continue to drive the PPI, new sales have been driven by the total price quantum supported by smaller unit sizes.”

If you are eyeing a new condominium launch but are ensure of funds availability for purchase, our mortgage consultants at iCompareLoan can set you up on a path that can get you a home loan in a quick and seamless manner.