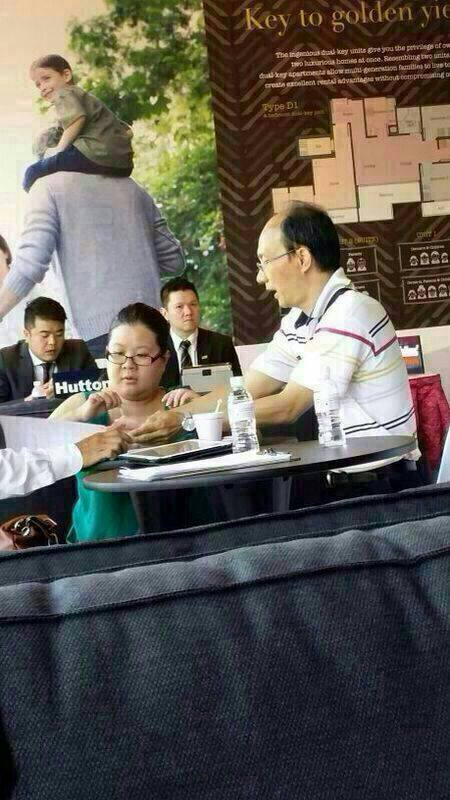 A Facebook user Dave Teo commented in the Facebook link of our story, ‘RC denies affiliation with woman who berated dumb cleaner at JEM but FB shows she was an active RC participant’, about the bad experience he had with the woman who berated the deaf-mute cleaner at JEM and her husband.
He identified the couple and said that they go around show flat and place 5 percent deposit, and after the ‘closing’ ask the agent to treat them for dinner. He said that they took him to a restaurant and ordered food which cost him a few hundred dollars. The cheque the couple issued however, eventually bounced.
Several others who commented on Dave’s comment suggested that the woman and her husband would do anything to score a free meal.

Another Facebook user who identified himself as a property agent described the couple as ‘phony buyers”.  He asked fellow agents to beware of the couple saying they bought from “PropNex and Huttons agents ranging from 2-4 units as bulk purchases,” but that all their cheques from various banks bounced.

He identified the couple as Alice and Chong Meng Chew. This Facebook user also released their personal details like address and phone numbers. He advised other agents to demand only Cashier’s Order from the couple if they ever come forward to buy any realty in the future.
“I apologise for the behaviour but I was having a bad cold that day, and I didn’t know that the cleaner was deaf and mute,” Fong told Chinese newspaper Shin Min today (5 Jun). In the video shared by Euphemia Lee of the incident however, Fong was heard implying, “he is old, he is deaf and he is dumb, so? I must give in to him? I don’t understand!”
Fong told the Chinese newspaper earlier today that she had taken half-day off from work on that day as she was feeling unwell. She had also noticed “something dirty” in the food she had finished eating, and wanted to take a picture of it to complain. That was the moment when the 64-year-old cleaner came to clear her plate.
Fong said that she tried to tell him “no”, but the cleaner “would not listen”.Follow us on Social Media