Party leader Dr Tan Cheng Bock: The headquarters signifies that the PSP is very serious about its purposes Singapore — The Progress Singapore Party officially launched its new headquarters on Monday (Jan 27), in tandem with the start of Chinese New Year, at the Bukit Timah Shopping Centre.

More than 40 party members were present on the occasion, along with members of the media and special guests. 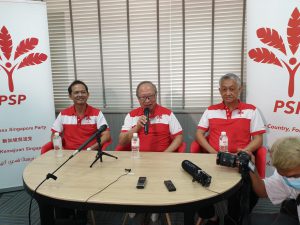 In its media release, the PSP said the launch of the party HQ was “to drive awareness of its cause among Singaporeans”. It was important, said party leader Dr Tan Cheng Bock, that it had a place of its own for meetings and events. Dr Tan and his wife performed the ribbon-cutting ceremony before those present were ushered into the party’s new space. A lion dance was then performed in celebration of Chinese New Year.

Dr Tan said in a speech: “Today is very significant. The party only started a year ago, but I can say we’ve come a long way, our strength has grown by leaps and bounds, and also the quality of people who have come in is also very good.”

“This place is in the centre of Singapore, and is the first shopping centre in this particular area, built in 1981,” he added.

“We are quite blessed we got this place. I think PSP will have a real home now,” he continued, glad that it was near the MRT and buses. He said the party had looked at a lot of places but that the new HQ was the best one.

Dr Tan was particularly thankful about the area’s centrality because he would be able to go easily to any part of Singapore. “This is a focal point for me to move. This is the centre point, I can go wherever I want, including Ang Mo Kio, which is quite close by.”

He added that the headquarters signified that the PSP was very serious about its purposes. “I am preparing a team that will take over the running of the country hope one day,” Dr Tan said. “It’s important that I get a place they can call home, somewhere they can come to at all times of the night. A home is very important.”

Congratulations on the PSP HQ’s opening poured into its Facebook page, with some netizens asking the party to contest where they lived.

One netizen called it the “best new year news”.

During the announcement of the new CEC members, Dr Tan, who is the party’s Founder and Secretary-General, said: “At 78 years, I have a short window that I intend to use mentoring and developing future Parliamentarians who will work for the good of our nation. We want to build a compassionate and truly democratic Singapore where good values and people matter. Freedom of choice and free speech without fear must be defended.

“We hope to be given the opportunity for Progress Singapore Party to be an alternative voice in Parliament. In due course, as the party and candidates mature, we intend to be ready to govern the nation. In the mean time, we will work with those who share our political beliefs of country first — before either party or self.”

It’s official! Raw footage of our Party’s official HQ opening! Blessed to have a place finally for us ! Do find our more about our party! Join us in our cause www.psp.org.sg ?????#defendsg #singapore #progresssingaporeparty #teampsp