The Independent Singapore News
Home News Featured News Prof Paul has spoken up, now junior doctors should step up too

Prof Paul has spoken up, now junior doctors should step up too 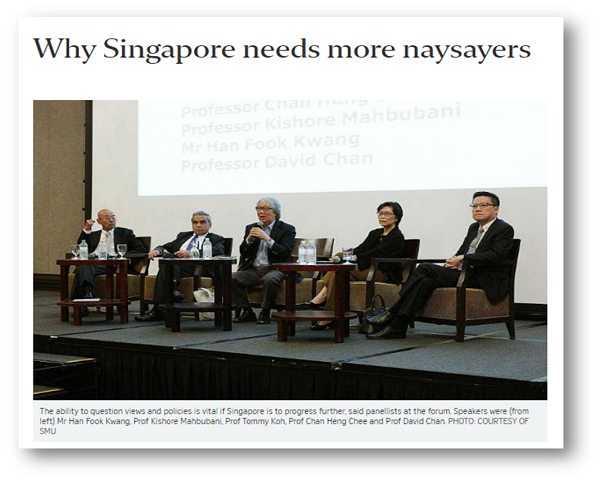 “I try not to surround myself with yes-sir men,” Prime Minister Lee Hsien Loong said at a closed door dialogue with 100 technology innovators in February. “That’s important because if all you have are people who say ‘three bags full, sir’, then soon you start to believe them and that is disastrous.”

On the same day that Mr Lee was saying those words, a panel of academics and former senior civil servants at a public forum was saying the same thing.

Singapore, they were urging, needed “more naysayers”, the Straits Times’ headlines the next day screamed.

“We need naysayers in leadership teams who can think the unthinkable,” Professor Chan Heng Chee said.

Professor Tommy Koh, Ambassador-At-Large, said, “When we appoint people to boards, we can also appoint challengers who are subversive and who have alternative points of view. That’s the kind of cultural change we want to see. It makes Singapore stronger, not weaker.”

But the fact that these experts or prominent personalities have had to make such a public call shows that speaking up is one of those things Singaporeans still find hard to do.

The culture of deference is still strong, and Singaporeans prefer to either keep silent or to only express their true feelings behind closed doors in hushed tones.

This seems to have been the case with the “junior doctors” mentioned by Professor Paul Tambyah, senior consultant at the National University Hospital (NUH).

Prof Paul had said at a public forum on May Day that some junior doctors in his field had told him that “every time they complained about conditions in the public hospital, they are told, ‘Oh complain lar, we can hire somebody from South or Southeast Asia who is willing to work for $3,000 a month’.”

Mr Chee chided the professor for not raising the matter with the management involved and to clarify the issue with the junior doctors.

The minister called on Prof Paul to disclose “the names of the administrators and what exactly they said to the junior doctors.”

“We will certainly look into the matter,” the minister said.

Prof Paul, according to the Straits Times, said that he had raised the issue with the administrator in question “dozens of times” but to no avail.

The professor also reportedly said that his forum comments “are not untrue” and can be substantiated in several doctor chat groups.

If what Prof Paul said is true – that the junior doctors did indeed express such grievances to him – then it would be incumbent upon these doctors to step forth and back up Prof Paul’s remarks.

The professor is doing what the Prime Minister and the panel of academics and ambassadors had urged – that Singaporeans speak up, that naysayers are to be welcome and taken seriously.

To be sure, the claim – that these junior doctors were threatened by hospital administrators when they (the doctors) made complaints about the working condition of public hospitals – is a serious one.

Mr Chee is therefore right to be alarmed, and to ask for more information.

It is now up to the junior doctors to either deny the claim (if it is untrue that they made it), or to substantiate Prof Paul’s remarks, if they had indeed expressed such views to him.

It is important to get to the bottom of this because:

But just as important, it is incumbent upon doctors (and everyone else in fact) to stand up for their own good, and to speak up to this end.

Professor Paul, who is a very distinguished specialist and consultant doctor, has raised the doctors’ grievances, and there is no reason to question his honesty in doing so.

It is now up to the doctors to stand with Prof Paul, and not throw him under the bus. That would be an appalling and unethical thing to do, and would go against the very grain of what being a doctor is all about.

And if the junior doctors do step up to the plate and substantiate their claims, let’s take them seriously; and even if their claims turn out to be not as they say, let’s take it in the right spirit – that it is better for them to speak up, even if they are proved to be wrong, than not.

“How can Singapore improve if people are not prepared to talk about past mistakes openly and constructively and learn from them?” wrote Han Fook Kwang, editor with the Straits Times, who was a member of the panel at the forum, reflecting on the forum.

“If more of them did so, perhaps attitudes towards failure might change, and there will be a greater willingness to take risk, and to speak up.”

Panellist and behavioural scientist David Chan jokingly addressed civil servants in the audience, saying: “You talk so much to me but when the minister is present, in front of him, you’re absolutely silent.”

Let’s hope the junior doctors will not be like the civil servants Mr Chan was referring to.Follow us on Social Media