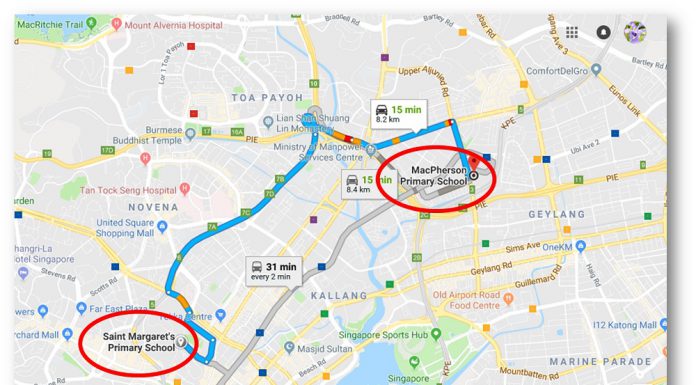 News that their children’s classes will have to be moved to a temporary school has got some parents upset, although the holding school is only 4.5km away.

St Margaret’s Primary School in Wilkie Road will have to hold its classes in the premises of Macpherson Primary School from 2020 to 2021 when the former undergoes upgrading works.

Macpherson Primary was selected by the Ministry of Education (MOE) and the Land Transport Authority (LTA) for several reasons: the school will merge with Cedar Primary in 2019 and thus will be vacant, and it also has facilities which St Margaret can use for its curriculum, plus it is close to St Margaret.

MOE told the media that the upgrading work in St Margaret will be extensive, and traffic conditions was a factor in deciding to move the school.

The decision to temporarily relocate the school, however, has met with unhappiness from some parents.

According to Channel Newsasia which spoke to them, their concerns include longer travelling time for their children, that their school bus operators would increase fares, and how the move will affect their children who will be taking their PSLE then.

Macpherson Primary is about 8 minutes from Mattar MRT station.

One parent was also upset that the news was only conveyed to the parents at the end of Term 3 (in June) through a letter given to the students.

“I went to the school to receive my daughter’s report book during the parent-teacher meeting held just before the school holidays, and no one said anything,” the parent said.

While the parents have their concerns, the school and the authorities have their own considerations, which are just as important.

For example, the safety of the students when upgrading works are being done.

MOE said, in response to media queries, that when it comes to such decisions, it will consider if carrying out upgrading works without having to move classes is possible.

In St Margaret’s case, the authorities decided that it would be best to relocate the school temporarily because of the considerable construction work required.

This is why, the MOE said, safety was a major reason for its decision to move St Margaret’s to a holding site.

Still, some parents felt it would be necessary to transfer their children out of St Margaret’s when the time comes.

Reaction from the public has not been kind to the parents.

On the Channel Newsasia facebook page, the parent’s complaint of inconvenience and a longer travelling time did not cut any ice with readers.

“What is a little inconvenience?,” Betty Nah said. “The behaviour of some of today’s parents really baffles us.. All they think about is their own convenience…strange…”

YK Tan said: “During our kampong time we have to walk 30 minutes to reach the school and our parent did not say inconvenience. Nowaday abit inconvenience so many complaints.”

“Having second thoughts for 4.5km?” asks Yani Rajandren. “I was only 12 when my parents shifted house. i juggled from Serangoon to Taman Jurong for my PSLE and scored 200 that time in 80s for my grades. Not super but at least it was not the distance that mattered to me.”

But not all were critical of the parents.

Wendy Yung felt that those who are complaining about the move are few, and that most parents of St Margaret’s students are understanding.

“Regarding moving of school, there sure will be “some” parents who have “concerns”, she said, “but there are also many parents who are collaborative.(many of the parents from St. M girls are very [nice] ppl people).”

“I see the comments here are very one-sided,” she said. “Only a handful complained or rather feedback. Some may have genuine issues or some really too protective but pls remember mostly of the parents accept and comply. Pls don’t comment until like parents of SMPS all useless leh.. A few parents mean the whole school?”