President Trump mocked for appearing to color US flag incorrectly 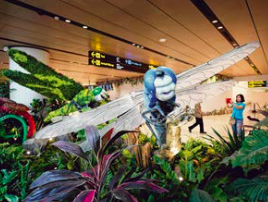 President Donald Trump was mocked for appearing to have colored in the US flag incorrectly during a visit to a children’s hospital in Ohio. The US President joined young children from Columbus in coloring a template of the Star-Spangled Banner during a visit to bring awareness about opioid addiction.

Trump was mocked after a picture posted by his health secretary Alex Azar (who accompanied Trump with his wife Melania on the visit) appeared to show that the US President had erroneously colored one of the stripes using a blue felt-tip pen.

The opioid crisis is one of our top priorities at HHS, with a drumbeat of action on the full range of efforts where we can assist local communities. Today, I joined @POTUS & @FLOTUS in Ohio to learn how states and communities are responding to the challenge of opioid addiction. pic.twitter.com/NwxSoeNznA

After the picture was picked up by a teacher on Twitter who wrote: “The president has colored his flag wrong. That is all,” several other Twitter-user jumped to the President’s defense.

The President has colored his flag wrong.

One Twitter user wrote: “You’re hilarious if you don’t think the president knows what a flag looks like. HES COLORING!!!!!! with children. If it was a horse and he colored it pink would people be upset he colored a horse not a REAL horse color???”

While another said: “Maybe some kid asked him if a Flag could be other colors, then he proceeded to show them that life can be anything you want it to be. Then colored the flag another color to show them. Not everything is that deep. It’s just a coloring page for kids in an elementary class.”

Other Twitter-users however, were not so forgiving.

One posted: “That moron needs to go back to school.” Another said: “His coloring is at Nursery School level though. Along with his civics knowledge.”

While another said: “Cmon it’s not that easy as having a reminder attached to your clothing…. Oh. Didn’t spot the lapel pin.”

Some others noted that the pictures seemed to suggest that the children were disinterested in the project with the President.