Porsche convertible shielded by umbrella on a rainy day 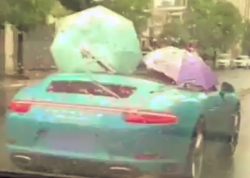 On 25 September, a heavy downpour took place in Jiangsu, China. Against all odds, someone insisted driving a Porsche convertible, with two riders each holding an umbrella to shield rainwater from drenching themselves.

From a video uploaded by Pear Video, a long steel rod can be seen protruding out of the car, a sign that the car is unable to convert the roof back to shield the car, according to People’s Daily.

Man & his friend in E China's Changzhou were seen using umbrellas to shield from the rain while driving a Porsche convertible w the top down pic.twitter.com/3oExsrKI76

The responses from Weibo users are hilarious, with one expressing that rich’s world is incomprehensible to us commoners.

The comment that gains most number of ‘likes’ reads “this is the reason why I don’t purchase Porsche.”

Another popular comment reads “I have an umbrella, but now the only thing that I lack is an M4.”

Last but not least, one netizen teases “I can only give this show 88 [out of 100], because traffic police has deducted 12 points.”