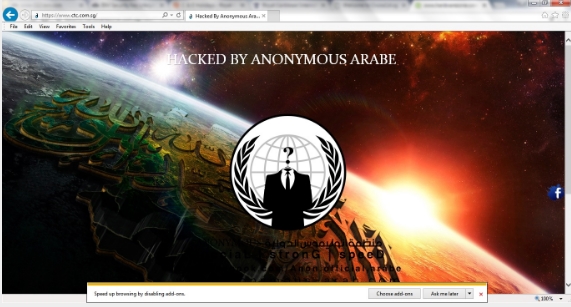 According to forumers at HardwareZone the popular local travel website, CTC Travel, was hacked by a group claiming to be from the Anonymous Arabe collective. The hack was noticed by forumers at about 9am.

Those that logged into the website saw an image of the earth with the sun beaming from behind the horizon. The hackers left a message, “Hacked by Anonymous Arabe” and a logo, which belongs to a collective of hackers who calls themselves ‘Anonymous’.

The hackers also left a message which read:

“WE ARE HERE TO DELIVER A MESSAGE !
WE ARE MUSLIMS, AND WE ARE PROUD !
QURAN IS OUR BOOK
IN ALLAH WE TRUST
FOR ALLAH WE WORK
DEATH TO ISRAEL
FREE PALESTINE
JERUSALEM IS OURS
Expect us!”

The website was restored at about 11.30am, but nothing about the hacks was mentioned. It is also unclear if any information was compromised by the hacks.

In Nov 2013, a Moroccan Government website was hacked by Anonymous Arabe.

In the same month, hackers claiming links to international hacking group Anonymous defaced Prime Minister Lee Hsien Loong’s official website barely a day after he said authorities would spare no effort to track them down.