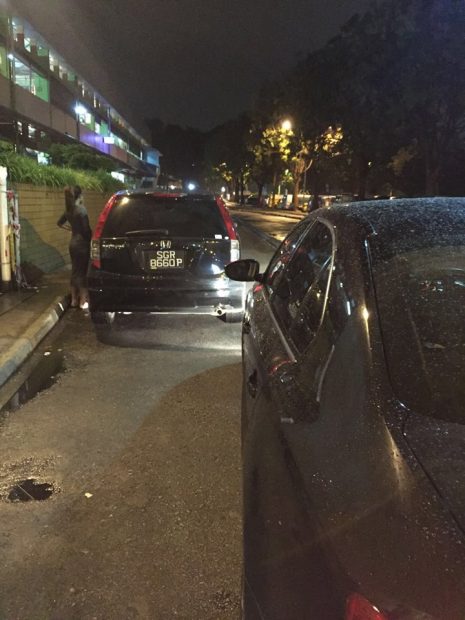 Facebook user WqKen Chong posted some photos and a video of a driver who punched his father after a dispute outside the KFC outlet at Woodlands Point. The user said that his father, a 55-year-old man, sounded his horn when he saw a car (license plate: SGR8660P) blocking a one-way road.

The driver of the car who was not in the vehicle, but came back a few minutes after hearing the honks. At first he tried to explain to Chong’s father that he was doing something, but “took his own sweet time to stand outside his vehicle with no intention of leaving”. But when Chong sounded the horn again, the man got agitated and asked him if he can’t wait.

When the 55-year-old told the man that he was in a rush and couldn’t wait, the other driver asked him to step out of the car, and when he did, he was allegedly punched twice in the face.

Chong said that his sister who was a passenger in the car called the Police for help. The Police have confirmed that that received a call for assistance at 11.23pm on 11 Sep at Woodlands Centre Road. They responded to the call and classified it as a case of voluntarily causing hurt, a non-seizable offence.

“The party involved was advised accordingly and no further police assistance was required,” a Police spokesperson said.


Just in case you can’t read what Chong posted, this is what he said:

—
Hi Bros and Sis please help me to find this owner out… Driving a honda stream SGR8660P..Incident happened in front KFC of woodlands point. This honda stream owner park his vehicle on a one way road blocking the way when my dad wants to drive thru.

Therefore my dad give him a horn to alert him and notice the driver was not in the vehicle. Few mins later driver came by and ask my dad to wait as he was doing something. He then walk towards his vehicle taking his OWN SWEET TIME having no intention to leave immediately as he was still standing outside his vehicle. Which is when my dad gave him a 2nd horn.

Upon giving him the 2nd horn, he thinks that this road was owned by his father road he walks towards my dad vehicle and ask my dad can u wait in a un-polite manner. My dad say no because he was in a rush back due to wee hours. Or rather anyone would have said no i’m sure.

This ball-less honda stream owner then ask my dad out from dad. Without understanding the reason for the rush he gave me dad 2 punches on his face. EH COME ON IF U GOT THE BALLS PICK SOMEONE OF YOUR OWN SIZE. After punching he went back to his vehicle and drove off.. NOW WHY I CALL U BALL-LESS you should know. WHY DROVE OFF??? AFRAID OF POLICE???

Helplessly my dad n sister has to call for police and settle this issue.

I’m posting on facebook reason to find out this ball-less owner have some guts come out and apologize to my dad. You are in the wrong and you have the cheek to wack a 55years old man.

Remember what goes around comes arounds…Follow us on Social Media