Home News PM's idea of Singapore as a non-melting pot of races will only... 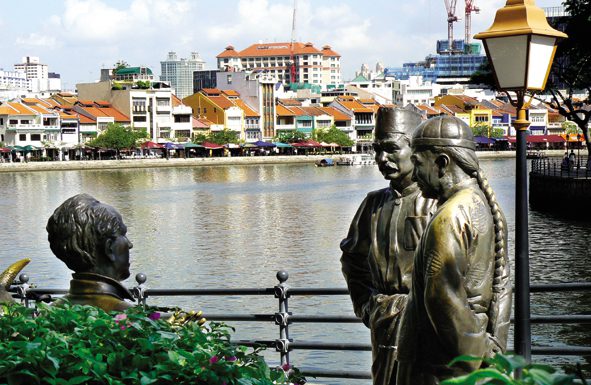 One united people regardless of race language or religion or one divided people by race, language and religion?

An ill at ease Prime Minister seeming totally unconvinced of what he was saying finally comes right out and for the first time in the history of this nation makes it plain and says at the opening of the new Singapore Chinese Cultural Centre (SCCC) at Shenton Way:

“Our aim is integration not assimilation……OURS IS NOT A MELTING POT SOCIETY …..”.

Contrast this with what Shanmugham said on January 30th this year speaking at an annual Chinese New Year gathering at the very same new Singapore Chinese Cultural Centre (SCCC) at Shenton Way:

“It has to become a centre for our people to fuse together and build our own culture, taking and drawing from 5,000 years of history,”

So which is it? Build our own fused culture (and that’s certainly a melting pot society) or not as the PM says?

If “our aim is integration not assimilation” it is crystal clear to me at least that the more we cling on to our ethnic roots the less likely we are to be one united people and will remain a society divided by race language and religion. The more Chinese or Malay or Indian you are distinct variant or not Singapore centric or not, the less Singaporean you will be. So simple.

It is time to cut the Gordion knot that binds us to the far away lands our forefathers came from a long long time ago and liberate our current society to forge its own destiny as a united people.

This nonsensical double speak about “distinct variants” of our ethnic cultures and Singapore centric Chineseness or Indianess is the refuge of the desperate trying to impose an ex post facto revisionist explanation of the reality that is the Singapore melting pot.

So rather than call a spade a spade and say that a fusing uniquely Singaporean culture is taking root, the PM has come up with this invented notion of “distinct variants” and Singapore centric ethnic cultures.

Does the Prime Minister want to institutionalise cultural schizophrenia among his citizens? Cultural schizophrenia is a situation where (for example) the Singaporean Chinese person, is duty bound to be both proud of his Chinese culture, but at the same time bound to be conscious of his difference from the “Chineseness” of those in Malaysia, Indonesia, China, Hong Kong, or Taiwan and on top of all that at the same time, prioritise his Singaporean identity. Whatever that means to the Prime Minister, he offered no clues as to what he actually meant by saying that. Does this make sense to any one? Is this really the best way forward for Singapore society?

The Government is either in denial or is desperately trying to stop the unstoppable evolving uniquely Singaporean identity and culture taking root in modern day Singapore …no not shorn of our different ethnic roots …not forcing one culture to assimilate another but embracing all ethnic diversity in all it’s technicolour diversity and allowing a natural fusing of our distinct ethnic roots into the evolving melting pot that is Singapore.

The PM has presented the people with a dilemma between choosing a society with every race shorn of its distinctiveness or a society where each race preserves its unique culture and traditions. This is a fallacy of oversimplification that offers a false choice between these two options. There are more nuanced outcomes to consider and it’s not black and white as presented.

It is certainly equally not a choice between one race assimilating another or a race or culture being coerced into conforming with other cultures or identities like that of the majority for example. This is a fallacy because it reduces complex issues to simplistic choices and ignores realities and significance of matters such as the Constitution guarantee as to equality of all persons here under the law and specific constitutional safeguards for minorities which remain relevant until such time as the majority-minority’s paradigm becomes hopefully irrelevant in future.

Most importantly and fundamentally this is a choice for the people to make and not for the Government to impose upon the people. Therefore a policy to rule out Singapore from being a melting pot society is unacceptable. This is a choice that Singaporeans will make over time.Follow us on Social Media