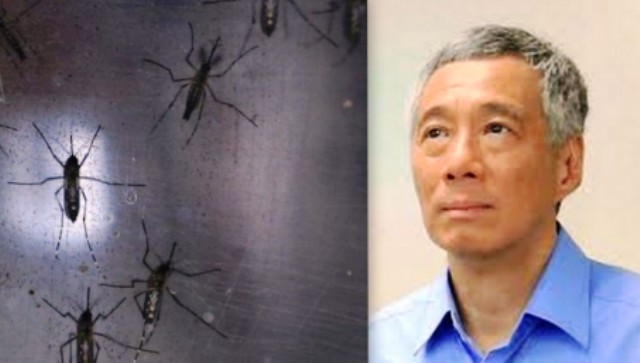 While Zika infections have climbed to 151 in Singapore (https://theindependent.sg.sg/zika-infections-rise-to-151-another-pregnant-woman-among-those-infected), PM Lee posted a message on his Facebook page yesterday to say that it was only a matter of time before the disease reached Singapore.

He assured the public (https://theindependent.sg.sg/pm-lee-comments-on-zika-cases-5-days-after-official-announcement-of-infection), “Scientists are still learning about this new disease. But we know that for most people it is mild, and in fact often causes no symptoms at all.”

“Pregnant women are at risk, as they are with other viral infections like dengue and chicken pox. Do take precautions and get tested if you show symptoms,” he added.

He said that the best defence is to eradicate mosquitos and destroy their breeding habitats.

“Do the 5-step Mozzie Wipeout. Let’s all do our part to fight Zika, and dengue as well.”

Zika may cause brain damage in adults too

While PM Lee said that Zika is mild and “often causes no symptoms at all”, the latest study published by American scientists 2 weeks ago, suggests that adults getting infected with Zika may not be as innocuous as people think.

Experiments on adult mice engineered to mimic human Zika infection show that the virus seems to attack the immature adult stem cells which are vital to learning and memory. This is the first study examining at the way Zika attacks the adult brain.

It was suggested that over time, the gradual attack on those cells could lead to shrinkage of the brain and major impairment of cognitive processes in adults.

Major international news agencies like the UK Independent, NBC News and Bloomberg have carried the report.

“Zika can ‘wreak havoc’ on the brains of adults and cause major, lasting damage, according to a new study. The research could overthrow the assumption that the virus is only of major worry to pregnant women,” UK Independent reported.

“But a major new study on mice indicates that the impact of the Zika infection in other adults could be far more serious and sinister than had previously been thought.”

One of the scientists, Professor Joseph Gleeson from Rockefeller University, said, “Our results are pretty dramatic – in the parts of the brain that lit up, it was like a Christmas tree.”

“It was very clear that the virus wasn’t affecting the whole brain evenly, like people are seeing in the foetus. In the adult, it’s only these two populations (of brain cells) that are very specific to the stem cells that are affected by virus. These cells are special, and somehow very susceptible to the infection.”

“Based on our findings, getting infected with Zika as an adult may not be as innocuous as people think,” he concluded.

Bloomberg also reported, “The stem cells, known as neural progenitor cells, help replace damaged neurons—the main components of our brain and spinal cord—and assist with learning and memory. Using a mouse model, the researchers found that Zika can target those cells, which can lead to reduced brain volume and complications in brain functioning—similar to the long-term effects of microcephaly.”

“Neural progenitor cells were previously thought to become resistant to Zika as they became neurons in healthy adults, but Gleeson’s team’s study found that Zika affects the specific cells in adults just as it does in fetuses.”

“It’s a complex disease—it’s catastrophic for early brain development, yet the majority of adults who are infected with Zika rarely show detectable symptoms. Its effect on the adult brain may be more subtle, and now we know what to look for,” said Sujan Shresta, another scientist in the study, who is a professor at the La Jolla Institute of Allergy and Immunology.

NBC quoted what the scientists said in their report, “Our data therefore suggest that adult as well as fetal neural stem cells are vulnerable to Zika virus neuropathology. Thus, although Zika virus is considered a transient infection in adult humans without marked long-term effects, there may in fact be consequences of exposure in the adult brain.”

“It’s not clear what that might mean to people affected by Zika. Researchers are only beginning to study it and its long-term effects,” NBC said.

“Adult brains are less vulnerable to damage than those of developing babies, but brain damage can cause epilepsy, personality changes, depression and dementia.”