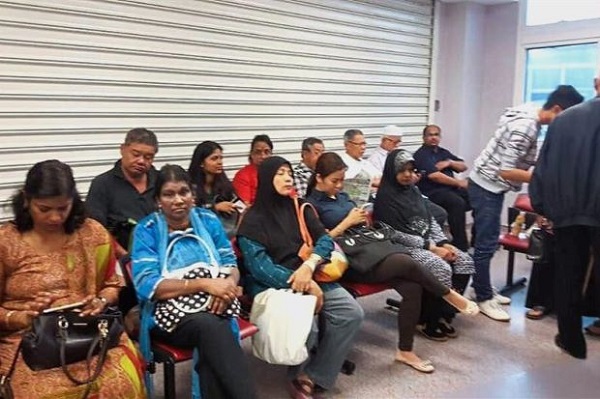 [Photo: The minister could be seen in the back row, in white shirt.]

It is not often that you get to see a Cabinet Minister where ordinary folks frequent. So it is with much surprise that Malaysians reacted to the news that one of its ministers was photographed in the waiting area of Hospital Kuala Lumpur (HKL).

“International Trade and In­­­dustry Minister Datuk Se­­ri Mustapa Mohamed was waiting to see a doctor, certainly not a fa­­miliar sight when it involves a VIP!” said The Star.

The minister was sitting among the patients waiting to see the doctor.

A photo of it was posted on the Friends of BN – Barisan Nasional Facebook page on Tuesday.

When contacted, the minister said, “I had an appointment at 8am on Monday at the specialist clinic of HKL. While waiting for my turn to see the doctor, I had the chance to chat with some of the patients.”

Apparently, he had contracted some “severe rashes” after returning from an overseas trip.

He also said that it was nt his first trip to the hospital.

In that earlier post, a man had related how his hospital bill was reduced to just a few dollars from several thousand because he was a citizen.Follow us on Social Media