The woman said that when she looked at the window, she saw a tan hand holding a phone pointed at her.

A Singapore school student has reported that a pervert tried to film her showering in the comfort of her own ground-floor HDB flat in Sembawang.

Revealing that this is not the first time someone has tried to do such a thing, Reddit user u/nanathebanana21 reported that the incident took place yesterday (7 Aug) around 9.10 to 9.15pm. She reported:

“I live on the first floor in a HDB block in Sembawang. I entered to bathe at around 8.50pm, after coming home from school. As I was showering, I heard a sound come from the bathroom window which was open for ventilation purposes. The window was a kind of pane window that those classrooms in secondary school have.

“When I looked at the window, I saw a tan hand holding a phone and it was pointing at me.

“I immediately tried to cover myself and hide away. The shower was far away from the door so I began to panic. I was desperate for him to stop filming/taking pics so I shouted for him to go away. And he did.”

The student said that in retrospect, she feels she should have acted differently but she just wanted the pervert to stop in the heat of the moment. She added that the culprit was using an Android phone with a big camera in the centre of the back of the phone.

Apparently, this is not the first time such an incident has happened in the student’s block. She shared, “My neighbour faced the same thing about a year ago and managed to confront the guy but he ran away.”

The student revealed that she has already lodged a police report and urged her fellow netizens to be wary and keep an eye out for such things. 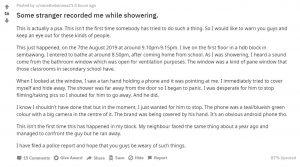