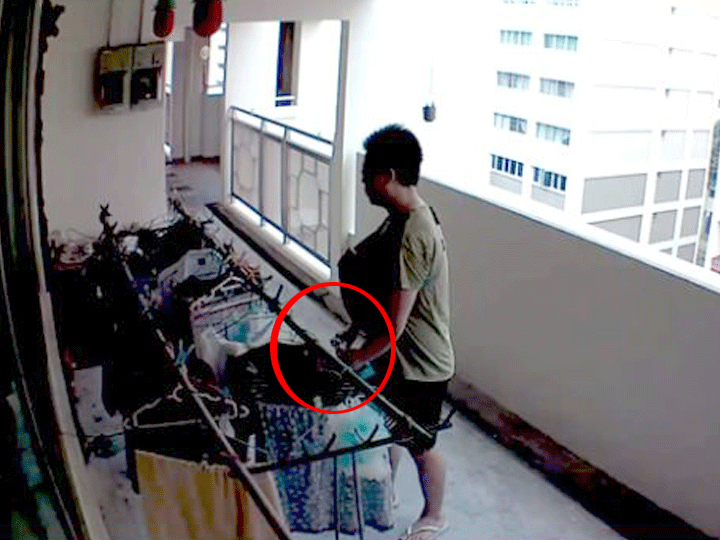 A bra thief was caught in the act of filching a 26-year-old’s bra earlier this week at 135 Bedok Reservoir Rd.

Puzzled that 4-2 of her bras had mysteriously disappeared from a laundry rack outside her home, the resident had installed a CCTV camera and caught the thief red handed.

In the incriminating footage, the thief could be seen striking at about 12.30pm when he appeared, nonchalantly using his phone beside the laundry rack.

Suddenly, he kept his handphone in his pocket and reached across the laundry rack to fish one of the bras drying on the rack.

Police investigations are ongoing. It is unclear whether the thief has committed the same offence before.

Curiously, this is not the first time a lingerie thief has struck Bedok. Early last year, a 29-year-old air-con repairman, Lee Chan Hoe, was busted after the police raided his home and discovered 55 bras and 51 panties in his possession.

The thief was nabbed after he stole a purple bra from the laundry rack of a flat unit in Bedok North St 3, around 4am on 5 Feb 2016.

Eyewitnesses report seeing Lee lying face down on the floor while holding the bra, before kneeling, then lying on his back and sniffing the bra. Lee retuned the bra to the rack some time later and walked away.

THe thief was subsequently sentenced to 12 months’ mandatory psychiatric treatment after he failed to account for the linferior found in his home.Follow us on Social Media