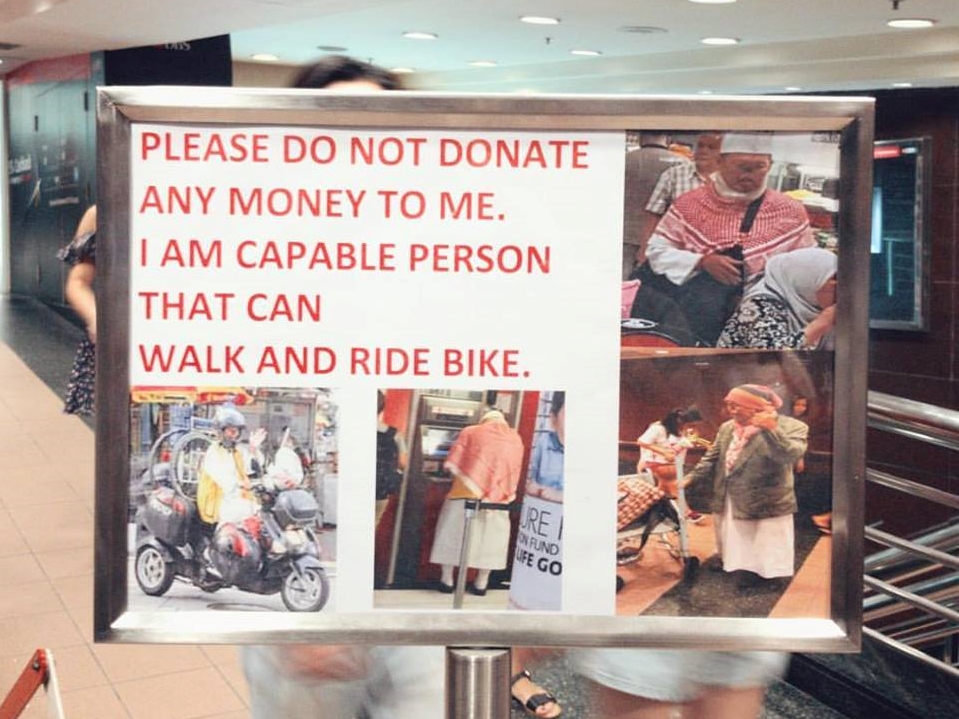 Independent electoral candidate Zeng Guoyuan  – better known as the “Parrot Man,” named for his pet parrot that he always carries around – has been embroiled in a dispute with Ngee Ann City mall over the past six months.

The mall alleges that the 65-year-old pretends to be a cripple so he could sell tissue paper packets at the linkway between Ngee Ann City and Wisma Atria. Ngee Ann City has called the police to take action on Zeng 30 times in the past six months, citing that he causes a “security concern” since he parks himself in the linkway during evening peak periods of 5pm and 7pm, thus allegedly blocking traffic in the bustling passageway.

Zeng, who is able to walk and ride his bike, has been arrested several times since January, with the police recording at least seven offences by him at the linkway. These offences include begging, using abusive language on a police officer, and assaulting the mall’s security personnel.

Zeng has also been accused of using vulgar language on police officers, by nearby shopkeepers. 48-year-old jewellery store sales assistant Malee Wee told TODAY: “I often hear him shouting at the police. He would scold a lot of bad words (when asked to leave).”

Another woman, who did not wish to be named due to safety concerns, said: “He can be quite hysterical. Once, he even marched to our shopfront knowing that we have called the security.”

In spite of all of this, Zeng – who sells tissue paper packets at Geylang Serai Market during the day – fully intends to return to the linkway every evening.

Defiant, Zeng claims that the mall’s management is “selfish” and “jealous” of the money he receives from shoppers and that he has a right to occupy the linkway since it is a common area between the two malls.

The father of two sons who had lost his nose to cancer, added that he was not begging and that he simply needed the money since his nose and colon cancer had spread to his liver and lungs.

“True, I require the money (in case I become bedridden), but I am not begging. I don’t go so low as that… I don’t con them and ask them for money if they don’t have money. If they have extra, they give, I say thank you. I don’t want to con.”

Serial electoral candidate wannabe Zeng Guoyuan, better known as “Parrot Man”, has been embroiled in a spat with the management of Ngee Ann City. The mall's management said that its main grouse with Mr Zeng is that he persistently situates himself at the underpass during the evening peak period arriving at timings between 5pm and 7pm, blocking the already-congested walkway and he poses a “security concern”.Watch and read what Mr Zeng has to say in response: tdy.sg/2wUJBlg (Video: Wong Pei Ting/TODAY)

Last month, Ngee Ann City put up a sign along the walkway in what appears to be a last-ditch effort to warn pedestrians from being “conned” by Zeng. The sign which features photos of Zeng standing and riding his bike informs the public that Zeng is a “capable person.”

“We put up the notice to inform the public that this person is not a true beggar… He pretends to be handicapped, sitting on a wheelchair, and putting a cloth over his leg, but he can walk. When he leaves, he will just stand up and push his wheelchair.”

Shoppers have also reportedly given feedback to Ngee Ann City about Zeng’s “scary” appearance and his parrot’s droppings, given fears of the avian flu. They have also shared concerns that Zeng should be referred to government bodies for help.

A spokesperson of the Ministry of Social and Family Development said that the ministry’s Destitute and Shelter Support branch is aware of Zeng’s situation and has offered assistance to him before. The spokesperson added that Zeng rejected their last offer of help made late last year.

Zeng contested under the Worker’s Party ticket in the 1991 General Elections. He has since failed to contest as an independent candidate in the 2011 and 2015 General Elections and the 2012 Hougang By-Election.

During nomination day for the Hougang By-Election, Zeng claimed that an election official told him that he was unable to contest because of a 2008 conviction for using abusive language on two police officers who entered his MacPherson shophouse, where he used to sell hair products.

Zeng insisted that it was not him who used profanity against the officers but his pet parrot that mouthed the expletive.

The former acupuncturist was also fined S$3,000 in 2009 for putting up unapproved banners displaying a picture of terrorist Mas Selamat Kastari. In 1996, he was convicted of molesting a woman at his former clinic, as well.Follow us on Social Media