Home News Featured News Parents marry off their twin children to one another, believing them to...

Parents marry off their twin children to one another, believing them to be lovers in their past life 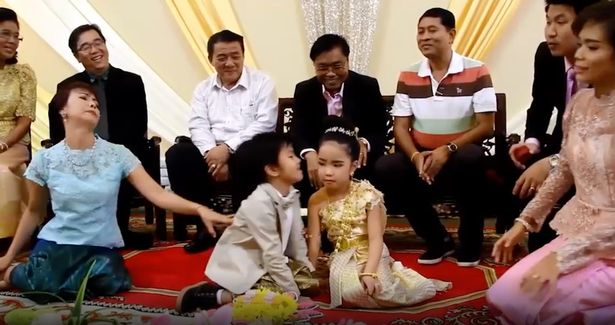 Thai parents, 31-year-old Amornsan Sunthorn Malirat and 30-year-old Phacharaporn, have gotten their twin children married, believing the siblings to be lovers in their past life. Both children, named Guitar and Kiwi, are six.

Speaking to the Daily Mail, the parents said that they knew from the moment that their twins were born that the children would have to be married to one another.

It is believed that the parents subscribe to an ancient belief that says that twins have karma from a past relationship and may be reborn together if the debt was not settled. The belief prescribes that twins must be married to one another quickly or risk bad luck in the future.

Amornsan told reporters: “We must arrange a wedding for the two twins as a solution to the issues they had before they were re-born. If they are married, they will live healthy and successful lives and not be sick.”

According to the local press, the pre-schoolers were married off in a lavish Buddhist wedding ceremony that cost thousands of US dollars, surrounded by their parents’ friends, neighbours and relatives.

Guitar reportedly had to pay 200,000 baht cash and gold worth around 50,000 baht as dowry to marry his twin sister. The young groom also had to participate in a game that involves him walking through nine gates to meet the child bride.

The traditional marriage ceremony included a street procession that saw guests dancing and playing musical instruments on the streets before Guitar gives Kiwi a kiss on her cheek.

The twins’ mother said: “They were both so sweet during their wedding. They will be the best of friends for the rest of their lives.”

She added that since the ceremony is only meant to ward off bad luck and is not legally binding, the twins are free to find their own partners when they come of age.Follow us on Social Media