The Independent News
Home News Parent of two kids says he is “disappointed with MOE” because dismissal...

Mr W said that because the dismissal timings were so close together, bus stops would be crowded with students regardless of the time they were let out as it was unlikely that public buses would arrive at that frequency

Ahead of schools reopening on Tuesday (June 2), one parent took to social media to express his disappointment with some of the measures put in place for his two Primary school-going children.

One Mr W wrote on social media in a post last Friday (May 29) that he was “disappointed with MOE”.

He added that because the dismissal timings were so close together, bus stops would be crowded with students regardless of the time they were let out as it was unlikely that public buses would arrive at that frequency.

While Mr W did not specify which school his children were from, other Primary schools had different systems. 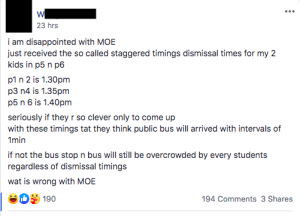 Those who commented on his post tried to find a solution with staggered timings. Most suggested that the students be released in 30-minute intervals. However, others disagreed adding that if they had two Primary school children with one in Primary One and the other in Primary Six, that the waiting time for parents would be very long.

Others clarified that it was not the Ministry of Education that decided on dismissal timings, but the school itself.