Over 80 per cent of nearly 5000 people who participated in a recent poll conduccted by Yahoo Singapore have disagreed with Emeritus Senior Minister Goh Chok Tong’s assessment that Prime Minister Lee Hsien Loong’s wife Ho Ching would have made a good minister.

ESM Goh revealed his assessment of Ho Ching in his new authorised biography. When biographer Peh Shing Huei asked ESM Goh about whether he spoke “to Ho Ching at any point about joining politics,” Goh responds that he did and that she would have made “a good minister, a different kind of minister.”

83 per cent of respondents have since indicated to Yahoo that they disagree with ESM Goh’s assessment and asserted that Ho Ching would not have made a good minister.

10 per cent out of the 4959 respondents said she may have made a good minister while 7 per cent agreed with ESM Goh’s take and expressed confidence that Ho Ching would have done well in politics: 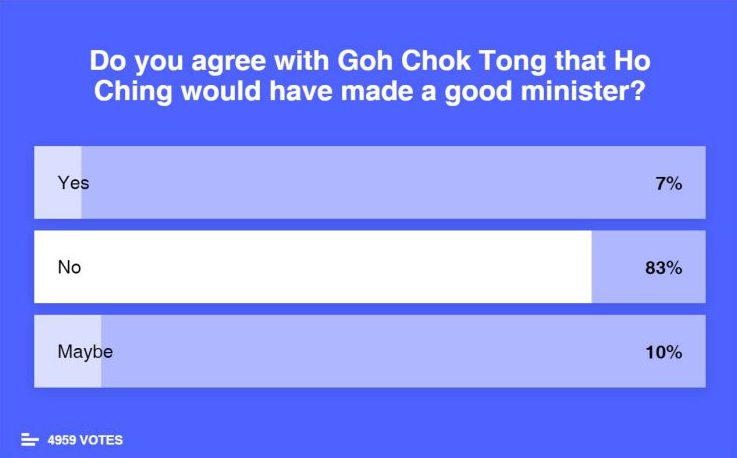 https://theindependent.sg.sg/ho-ching-remains-temasek-ceo-nearly-a-decade-after-failed-leadership-succession-plans/Follow us on Social Media