Opinion: Opposition alliance “on the cards”; are Tan Cheng Bock & WP the key to unity?

Opposition unity. That term has epitomised the hopes of many Singaporeans for decades. In recent times, the call for the opposition to come together has gotten louder as the ruling party marches on with landslide electoral victories.

That hope of an opposition coalition in Singapore was revived last Saturday at a private talk held by the Singapore Democratic Party (SDP).

The SDP, seen as the biggest opposition party here after the Workers’ Party (WP), had invited the former two-term Malaysian MP, Tian Chua, to share his experiences as an opposition politician up north.

Mr Tian Chua is also the vice president of Parti Keadilan Rakyat (PKR), which is part of the Pakatan Harapan coalition which swept to victory in the recent general elections. Mr Tian Chua was barred from contesting the May elections because the Election Commission ruled that his earlier conviction for insulting a police officer disqualified him from defending his Batu parliamentary seat.

Mr Tian Chua is a well-known political activist even in his younger days, having been disqualified in 1999 as well, after he was arrested for protesting the arrest of Anwar Ibrahim, who is now the Prime Minister-in-waiting in Malaysia.

Pakatan Harapan was led by Mahathir Mohamed, the former Malaysian Prime Minister who has once again resumed his post after the victorious election. The leadership of Mahathir and Anwar has been the catalyst for the fall of Najib Razak and UMNO, the ruling coalition.

We will come back to what Mr Tian Chua said at the forum later.

Some in Singapore see the events in Malaysia as an omen of what is to come in Singapore. The expectation is that the ruling People’s Action Party (PAP) here will be similarly toppled, if only the opposition parties here would form a union like their counterparts in Malaysia.

This hope, however, is misguided, as several commentators have pointed out.

On Thursday, for example, Banyan Tree executive chairman Ho Kwon Ping described such thinking as a “foolish mistake”. He was speaking at a OCBC forum titled, “Singapore Politics and Business in an Age of Disruption”.

According to the TODAY newspaper, Mr Ho said there is a “huge and critical difference” between the two countries.

Mr Ho explained that what brought down the last government was “the unbridled, egregiously blatant and massively enormous corruption of the Najib government…”

Such blatant corruption, apparently, is not the case here in Singapore.

Indeed. To expect a similar fall of the Lee Hsien Loong government here would be delusional.

However, as Mr Ho also said, there are “unnervingly close parallels” between Singapore and Malaysia, and the lessons the PAP should learn from this. He cites “quasi cronyism amongst cliques of elites” as one example.

And herein lies the reason for an opposition coalition: although the PAP won’t be dethroned anytime soon because it is steeped in corruption, we should always be watchful and not wait till the rot has become so entrenched it is hard to dislodge.

An opposition coalition now, when things are relatively tame, would give the opposition a chance to work out a compelling vision for Singaporeans.

So, there are many lessons to be learnt from the Malaysian election campaign, to be sure, but perhaps the most important is this: the disparate opposition parties need to be able to set aside their individual party’s self-interests, when necessary, for the greater good. This include being able to rise above individual egoistical selfishness which have haunted and handicapped the parties here when it came to forming a coalition.

Recall the experiment back at the turn of the century when the Chiam See Tong-led Singapore Democratic Alliance (SDA) fell apart over internal disagreements. The SDA was made up of 4 opposition parties and collapsed due to differences on who should replace Mr Chiam in Potong Pasir, and over whether the Reform Party should be allowed to join the group.

The alliance effectively fell apart 10 years after its inception in 2001 after Chiam withdrew his party – the SPP – from the SDA.

If any coalition is to work, the parties must be able to work out such matters.

Also, any meaningful alliance would have to include the bigger opposition parties. The SDA comprised the Singapore People’s Party, which had been formed only recently at the time, and the National Solidarity Party (NSP), as the two main parties. The other two were the Malay PKMS and the inconsequential Singapore Justice Party.

The SDP and the WP – the biggest opposition parties – were not part of the coalition, although it is understood that the WP was approached to join it. 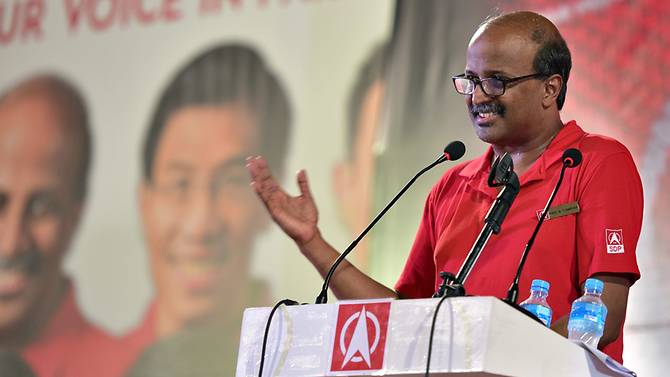 In an interview with Channel Newsasia published on 15 July, SDP chairman Paul Tambyah [picture above] was rather confident of an opposition alliance in the not too distant future.

He said such a possibility is “on the cards”.

“We recognise that we probably have more in common than actually what separates us,” he said. “Most of us are in favour of transparency, accountability, more social justice.”

Dr Paul, who became SDP chairman last year, said a catalyst for bringing the parties together could be someone like Dr Tan Cheng Bock, a former 5-term PAP MP and candidate in the 2012 presidential election.

“So we think that a figure like him, who has been in Parliament, who has run election campaigns successfully, could be a catalyst to bring people together,” Dr Paul said.

There have also been rumours that at 78, Dr Tan’s hopes of running again in the presidential elections are over and he may now choose to focus on grooming opposition and PAP potential MPs.

“I’m prepared to mentor any political group, even PAP chaps can come to me, I’ll still mentor them,” Dr Tan said in December. “Because the objective must be very clear: you want to train people who will be good MPs. MPs who will think of Singapore first.”

Is Dr Tan the key to this opposition unity?

It is hard to say as it is unclear if all opposition parties are amenable to his leadership or mentorship. But if Dr Tan were to captain what may be a rocky ship of an opposition alliance, the WP may just be persuaded to throw its weight behind the idea. If it does, then such a coalition would be more meaningful and effective.

One would therefore say that there are several key points to any opposition coming together: one, it needs a leader with moral authority whom everyone, or at least most, in the opposition would defer to; two, the WP must be involved, sooner rather than later; and the inclusion of civil society in any such movement.

Which brings us to what Mr Tian Chua said, when asked what role civil society groups played in the toppling of the Najib government.

And here, it is worth quoting his remarks in full [emphasis mine]:

“What the people are interested in is whether we were willing to come together and whether we were ready to provide an alternative like a shadow cabinet. We had the advantage of Mahathir and Anwar coming together despite their misgivings for each other. They understood that there was a bigger agenda.

“The NGOs were also at a crossroads. They knew they were wasting their time with a BN government who did not care about their agenda. They knew they had to either join the opposition or mobilize their resources to help the reformation.

“Political parties knew that they had to respect civil society and empower them to speak up and to lead in whatever they were passionate about. As for the Bersih movement, it was the parties that called on the members [of NGOs] to attend protests in the beginning as NGOs in M’sia were weak. The support for each other was crucial for reform and PH’s eventual success at the polls.”

In short, change does not happen at the hands of just the political parties, but involves also civil society and indeed the public who must see the need for change.

And this is why forming an alliance of opposition parties is the easy part. The more challenging part is to have a genuine alternative set of policies and principles – an alternative vision – which all can agree on. Only then would it be able to present such a vision to the people who must be convinced that an opposition government will not lead to a worse outcome.

For Singaporeans to take the leap of faith and cast their lot in with the opposition requires the opposition to have a clear way forward for the country. And that is no mean feat to achieve.

As for the events in Malaysia, the opposition alliance there may yet fail. If it does, UMNO may make a comeback. If that happens, the lessons for Singapore would then be: Look at what has happened in Malaysia. Singapore cannot afford such experiments with the opposition.

That would be what the PAP will be saying.

So, a coalition is only a starting point. The real work requires much more effort. Follow us on Social Media