Only Malay prefect from P4 cohort turns down appointment 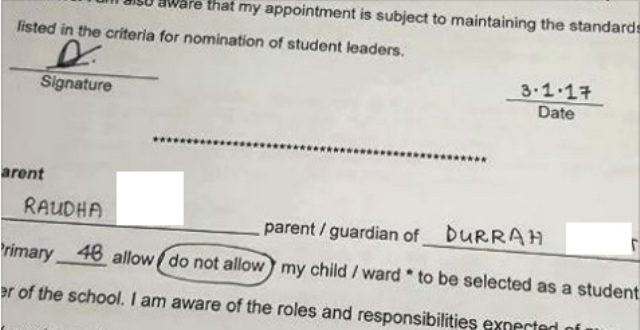 Facebook user Raudha Robu shared that her daughter refused to accept an appointment by her school to be a prefect because she was the only Malay student leader from her Primary 4 cohort. The girl who had been a prefect for 2 years prior, said that she felt ‘alone’.

Just in case you are not able to see Raudha’s post, this is what she said.

—
Durrah brought back a form. She got selected to be a prefect. She held the role for 2 yrs already. This time, she told me she didnt want it. As a mom, I asked and she has explained. I hear her reasons. One of them was for the fact that she is the only Malay nominated within the P4 cohort. So she felt “alone”.

Then the girl consulted the father. For her father, I could understand when Hid tried to coax her to take up the given role. He shared his sadstory, “Last time, I want to be a prefect but was never selected”. But what made me laughed was when he added, “Durrah, you are the only Malay nominated. Which is what made u special. Take it. For us; for the Malay community”.

Alas, Durrah chose not to accept but she said she will think abt it; especially when she learned that living her dad’s wish will bring her more of Allah’s blessings.Follow us on Social Media