Only 7 percent of engineering graduates from India are employable 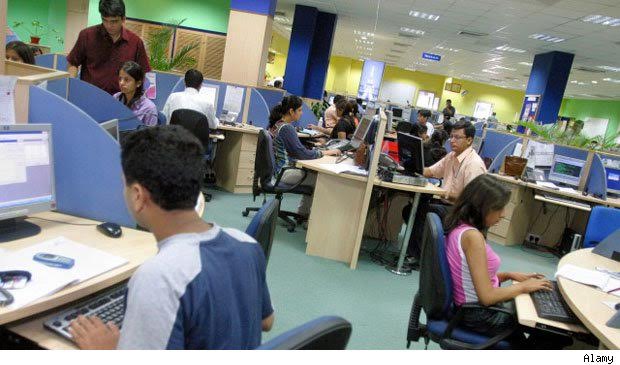 The report was based on an employability study of 150,000 Indian engineering graduates by a New Delhi-based employment solutions company, Aspiring Minds. In the study, it found that barely 7 per cent of these graduates are suitable for core engineering jobs.

“The findings were rather shocking,” India Today reported.

In Tier-1 cities like Mumbai, Bangalore and Hyderabad, only 18.3% of software engineers are job ready, while in Tier-2 cities like Pune, Nagpur and Surat, 14.2% are employable, the study found. Graduates from Tier 3 cities are the ones with the lowest employability rate due to poor infrastructure in these cities for developing skilled knowledge.

The study also found that 73.6% of the graduates lack English communicative skills and 58.0% have low analytical and quantitative skills.

India has thousands of engineering schools

According to the Ministry of Human Resource Development in India, the country has 6,214 engineering and technology institutions which are enrolling 2.9 million students. Each year, 1.5 million of engineering graduates are released into the market.

“But the dismal state of higher education in India ensures that they simply do not have adequate skills to be employed,” India Today said.

The Indian government is not able to create enough jobs to cater to so many graduates in India. This could partly explain why India is keen to sign trade agreements with Singapore, for example, to “export” their “unemployable” graduates out of India.

Some of the problems plaguing India’s engineering education include:

• Outdated syllabus – There is a big gap between what the market needs and what Indian education has to offer. Many of the teaching syllabus is hardly ever updated.

• Lack of quality teachers – After MNCs, the big IT companies of India, and the smaller engineering companies have had their pick, many from the remaining engineering graduates go on to get a PhD and join as faculty at engineering institutes. Thus, unlike other parts of the world, the Indian faculty is not comprised of the very best who have the skills to create brilliant students.

• Lack of innovation and research – Students are not given the space and scope to think and innovate, to question and come up with solutions. Rote learning is the norm and it instills in students complacency for more than 12 years of education. As such, they are unable to make the shift from un-questioning learners to innovators in the job market.

• Faulty education system – Semester systems and the process of continuous evaluation are not fulfilling their desired roles as the students are not interested in continuous learning. They only want good grades.

• Lack of skill-based education – Engineering students do not have much hands-on training in schools. Vast numbers of engineering students in India only study their textbooks, take their exams and collect their degrees. It is only when they encounter the real world problems do they realise their shortfall in practical skills.

• Ease of permission from state governments – A major cause of mushrooming engineering colleges is the ease with which state governments grant permission to little-known barely-trained educational trusts and organisations to set up education institutions. The relentless quest for profits as well as endemic corruption also affected the quality of education.

• The IT ’employability’ – Due to comparatively higher employment in the IT sector in India, students even from other non-IT disciplines take up IT-related courses. Thus, the end result of this inadequate education creates engineering graduates who are not well-versed in their core subjects, nor in IT.

• Poor English skills – This limits the employee to be able to communicate effectively with international customers.

“The Government of India needs to sit up and take notice of the issues that are threatening the very future and stability of our country,” India Today reported.

Many Indian nationals making enquiries to work in Singapore
Meanwhile, despite their short comings (if any), many Indian nationals are making enquiries on the Net about getting a job in Singapore. For example, on this thread, people from India are asking how to get a job here.One person, Ritika Ojha, who works in Dell Singapore, tried to help her fellow countrymen to apply for a job in her company. She asked them to come to Singapore on tourist visa to apply for jobs here.

Her profile also said that she graduated from Asansol Engineering College, a college situated in the city of Asansol in Bardhaman district of West Bengal, about 200 kilometers from the capital city of Kolkata, India. Asansol Engineering College cannot be found among the 746 top Indian universities in this list. It’s not known what kind of skill sets she has, which Dell Singapore found to be suitable to employ her here.At the same time, Minister Ong Ye Kung opined that retrenched Singaporean PMETs could not find jobs easily because they “lack the appropriate skills” (https://theindependent.sg.sg/acting-minister-ong-we-have-thousands-of-jobs-waiting-to-be-filled). Perhaps they should try going to India to get a “low quality” engineering degree first?