Singapore — The online community has thanked the Workers’ Party MPs for their tireless work during an eventful week in Parliament.

On Wednesday, WP chairman Sylvia Lim had tabled a motion entitled “Justice For All: Enhancing Equity In The Criminal Justice System”. It made reference to the high-profile court case involving former maid Parti Liyani and called on the House to affirm that “fairness, access and independence are cornerstones of Singapore’s justice system”.

It also urged the Government to “recognise and remedy its shortcomings” to enhance the justice system for all and facilitate a review of the system.

Several WP MPs spoke in support of the motion, which was the first Ms Lim had moved in her 14 years in Parliament. The People’s Action Party, however, made amendments to the motion’s wording and removed the call for a review. It also asked the House to affirm the “Government’s continuous efforts” to build a fair and just society.

The WP responded by saying that its call to action had been reframed as a positive acknowledgment of the Government’s efforts and refused to support the amended motion. All 10 WP MPs voted against the amended motion, which was passed by the majority PAP MPs in the House.

The Parliament session ended past midnight on Wednesday, which was also described as a first by Ms Lim.

WP chief Pritam Singh, the Leader of the Opposition, took time to rally his troops after the disappointing session. Sharing a photo of himself speaking with his party members in the early hours of Thursday (Nov 5), he reflected on social media:

“We put forward several suggestions to the Government, some of which were raised in our GE2020 manifesto, including others which we believed would improve the criminal justice system in Singapore. Even though the motion was amended, it was important for us to make our views known in Parliament.”

Thanking members of the public for their feedback and Parliament staff for their support, he added: “It’s a new day today. We go again.”

Mr Singh’s post drew more than 4,500 likes on Facebook, with people flooding the comments section with messages of gratitude and appreciation of the WP’s persevering attitude in the face of adversity: 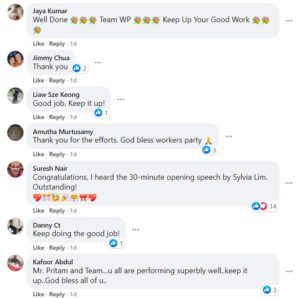