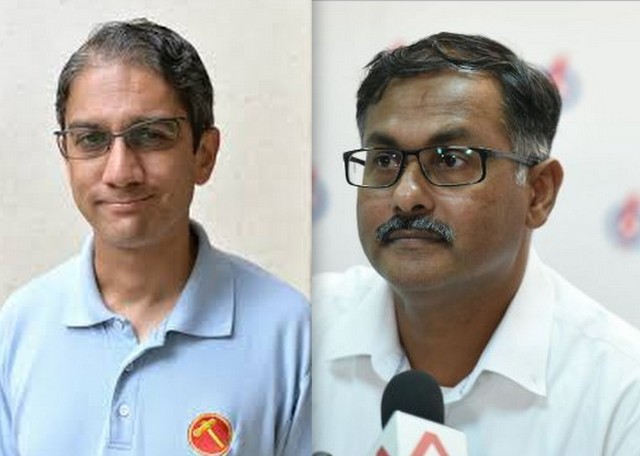 Speaking at an exhibition by Jurong-Clementi Town Council to showcase the infrastructural plans for Bukit Batok under its Neighbourhood Renewal Programme, People’s Action Party (PAP) candidate Muralidharan Pillai reportedly said:
“This plan that we are presenting is part of the PAP Jurong Town Council…If we don’t have the mandate then we don’t have the ability to carry on, because we wouldn’t form the town council,” he said. “That’s the rules.”
The infrastructural upgrading for the precinct according to the plans on display include a new 3-Generation Park and sheltered walkways around Blocks 140 to 149 at Bukit Batok West Avenue 4.
Mr Pillai who was with Deputy Prime Minister Tharman Shanmugaratnam at the exhibition said that he is seeking the mandate of the voters in Bukit Batok in the upcoming by-election so that the plans can be carried out.
Mr Pillai’s dangling of the ‘upgrading carrot’ to entice voters is of course not a new strategy for the PAP. Mr Goh Chok Tong first used it in 1992.
When he lost an unprecedented four seats in the 1991 General Election – 3 to Singapore Democratic Party (SDP) and 1 to Workers’ Party (WP) – Mr Goh called for a by-election for Marine Parade constituency in that year. Mr Goh called for the election to prove his mandate after the dismal performance by PAP at the 1991 election.
Dr Chee Soon Juan was introduced as SDP’s candidate in that by-election.
In the lead up to the by-election, in March 1992, Mr Goh participated in an exhibition in Marine Parade to showcase the infrastructural upgrading plans for Marine Parade residents. At the exhibition, Mr Goh said that to upgrade or not is all up to residents. If they voted for him and his team, he would have the mandate to give them the upgrading.
Mr Goh won the by-election with a reduced margin from the 1991 GE. His 4-men GRC team got 72.9 percent of the votes cast at the by-election compared to 77.2 at the 1991 GE. Despite the ‘upgrading carrot’ arguably not working as well as it should, it became the mainstay of the PAP’s politics from the 1997 GE.
The ‘upgrading carrot’ continues to be a controversial election strategy of the PAP.
At the Kent Ridge Ministerial Forum in 2011, an engineering student living in Hougang asked Prime Minister (PM) Lee Hsien Loong if he could pay less tax since the opposition-held ward does not enjoy upgrading programmes.
Seah Yin Hwa asked the PM, “When it comes to upgrading, what is being told to us is that we don’t have the funds to actually go ahead with lift upgrading, as well as shelters to the bus stops. When I look across the road to Aljunied GRC, they have everything.”
PM Lee paraphrased his question and said that what Mr Seah meant is why opposition wards are not treated as equally as PAP wards. PM Lee said the “answer is that there has to be a distinction. Because the PAP wards supported the Government and the policies which delivered these good things.”
He described upgrading programmes as ‘extras’ and said that, “between the people who voted and supported the programme and the government, and the people who didn’t, I think if we went and put yours before the PAP constituencies, it would be an injustice.”
Seah responding to PM Lee asked cheekily and to applause if he could pay less tax and maybe “take one or two years off my NS?”
PM Lee said that this is not possible because the SAF, defence, taxes and all the facilities which have been provided, are enjoyed by every Singaporean. But that Singaporeans can do something about it.
“You don’t have to keep voting for people not in white-on-white,” PM Lee said.
Dr Chee responded to Mr Pillai’s ‘upgrading carrot’ yesterday and said that “building infrastructure for Bukit Batok should be based on the needs and wishes of the residents of Bukit Batok, and should not be an election issue.”

Meanwhile, WP member and Non-Constituency Member of Parliament Leon Perera has weighed-in on Mr Pillai’s dangling of the ‘upgrading carrot’. Mr Perera writing in his facebook said:
“The People’s Action Party candidate for the Bukit Batok by-election has said that S$1.9 million worth of infrastructure upgrading plans for the ward cannot be carried out by the Town Council if his party is not elected. To me, that recalls the painful memory of the votes for HDB upgrading message in the 1997 General Elections. It’s good that we build necessary infrastructure to upgrade our towns. But is a campaign message like this any way to build a nation?”Follow us on Social Media