No peace for Najib with K-Pop and jailbird graffiti 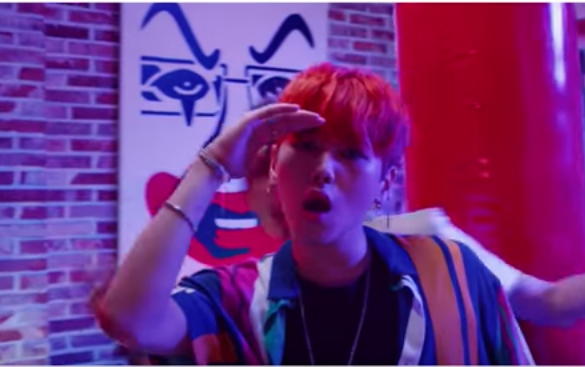 Remember the clown caricature that roiled the Malaysian authorities sometime back?

Well, it made its first cameo appearance – to our knowledge – in a K-Pop music video!

The caricature which sent Malaysia’s social media in an anti-Najib frenzy but which resulted in the graphic artist Fahmi Reza into trouble can be seen in some of the frames of the K-Pop video.

The music video “Falling in Love” was released in June but the eery Najib graphic was only recently spotted by Malaysian news outlets.

Korean singers Woo Jin Young and Kim Hyun Soo would be banned from entering Malaysia and the video blocked by the internet regulator MCMC had Najib kept his grip on power in Malaysia.

Malaysiakini said an amused Fahmi commented on Twitter, asking if the Korean artists knew that the caricature is of Najib. “An anti-corruption protest symbol from Malaysia could somehow make its way into a K-pop video,” he added.

The music video has been viewed over 450,000 times at the time of writing.

The two singers were also ex-participants of a popular Korean survival reality show ‘MIXNINE’ posted this music video for their fellow fans back in June.

The artwork appears about 1 minute 20 seconds in to the video and reappears at the 2:20 mark.

Fahmi Reza remains a controversial figure in reformist Malaysia. In one of his recent tweet, he said:

In English, it means: Until now, members of the PDRM (Police in Malaysia) are still treating peaceful protesters as criminals.

He then tagged the @PDRMsia asking “when will you change and respect the rights and freedoms of the people?”

And another grafitti of Najib Razak appeared, this time in Ipoh!