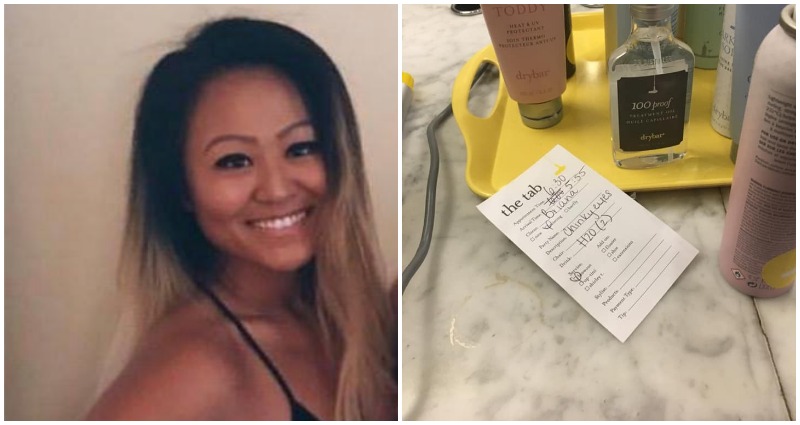 A Manhattan hair salon has fired an employee for writing the words “chinky eyes” to an Asian-American customer. The disheartened customer, Briana Tae, wrote on Facebook that the employee not only wrote the offensive words on her receipt but also tried to cheer her up by claiming she has “chinky eyes” herself.

Tae, who is a student at New York University’s Nursing School, said that she visited the Drybar salon’s Murray Hill outlet around 6pm on Monday for one of their signature blowouts.

Drybar rose to prominence for its blowouts, that helped the brand quickly climb the ranks in the beauty industry. The brand now sells their hair products in major beauty retailer Sephora’s online and brick-and-mortar stores.

Instead of leaving the salon happy, Tae left disheartened due to her interaction with a racist employee named Ashleigh or Ashley. Tae wrote on social media:

“So I’m sitting in my chair, relaxing, excited to get my hair blown out for my nursing school pinning ceremony tomorrow. A great day to be expected. However, I look over and see this. “Client: Briana, Description: Chinky eyes.”

“??? I’m sorry, what? I was the ONLY customer waiting with my friend and rather than describe me by my hair that was in a bun or by my black jacket or as a girl with a friend, I was described as a girl with chinky eyes. I have never in my life been so appalled. I’m sure I would not have been described as such if I was not Asian.

“All of my hard work and successes simply came down to a girl with “chinky eyes.” I’m sorry, is this not Drybar? An establishment that considers itself an upscale establishment? Since when is it okay to describe your paying customers as something so racist?

“When I confronted the “bartender” (girl who works at the front desk) regarding this, she could not understand why it was an issue and why it was highly inappropriate to write such a description. She tried to make me feel somewhat better by saying she had chinky eyes too.

“I’m quite disgusted by this experience, especially the night before a day of celebration for all my accomplishments in nursing school. I demand a call from corporate regarding this incident as I will not let racism be silenced.

“This was in the Murray Hill location on 34th Street in NYC around 6 PM. The bartender’s name was Ashleigh/Ashley. The manager’s (who was not working) name is Latoya.”

Tae’s post quickly went viral, with many netizens responding that they will not patronise Drybar salons in the future.

The backlash against Drybar was so severe that the brand responded to the Facebook post and revealed that it has fired the employee:

“This is very serious to us. The employee in question has allegedly been let go and no longer works at the salon. In response to this matter, Drybar is reviewing its training programs around diversity and inclusion so that this does not happen again. We are truly sorry.”

So I’m sitting in my chair, relaxing, excited to get my hair blown out for my nursing school pinning ceremony tomorrow….