The organisers of Miss Bikini Universe Singapore 2018 have replaced the original pageant winner Feline Wong Xin Yi, who was stripped of her title abruptly after a falling out with the event organiser.

Feline, who originally clinched the title at the pageant finals on 15 Sept, alleged that she was dethroned after she questioned the organiser when she will receive the prize she won as part of the competition.

The organiser has since passed the title and the disputed $1000 cash prize on to new winner, 20-year-old Andrea Wong. The organiser added on Facebook that Andrea will only receive the cash prize in hand “after representing Singapore at the international Miss Bikini Universe pageant in China on [sic] July 2019.”

The dispute grabbed the internet’s attention after Feline took to social media on Sunday and alleged: “I was actually stripped of the title of Miss Bikini Universe 2018 because I asked for updates about the prize and the organiser felt offended and decided to de-crown me. Can meh?”

Sharing screenshots of her conversation with the organiser “Dana,” Feline added: “I’ve put in so much effort in this pageant and now that I’ve won the title, they decided to strip me off my title just because the event organiser was unhappy that I asked for updates about the prize that I am entitled to and said that I am rude for doing so! Therefore, based on my attitude, I am not fit to be the winner of Miss Bikini Universe Singapore 2018”

In an update on Tuesday, Feline claimed that “Dana” – the organiser – “did not have enough contestants to begin with. So I helped her to take part in this pageant as 1 of the contestant and got 2 of my friends to take part too because she “was” my friend. Turning the story back, she mentioned that I was ungrateful…”

Sharing her correspondence with the pageant organisers online, Feline indicated that she has not relinquished the title or the crown, asserting that, “I want to emphasize that it’s no longer about retaining the title nor the cash prize. This is against my integrity and principle. However, I am still holding on to the title because if I were to give in, it would mean that i’m guilty of the accusation she made against me.”

The pictures the pageant organisers shared of the new Miss Bikini Universe Singapore 2018 appears to suggest that Feline has yet to return her crown since the new winner seems to be wearing a different crown compared to the crown Feline received when she won the title:

Besides slamming the organisers for being “super shady” – since the prize is only $1000 and since the winner will have to wait 10 months before payment – netizens also criticised the style of crown the new winner was given, comparing it to the Pope’s headdress: 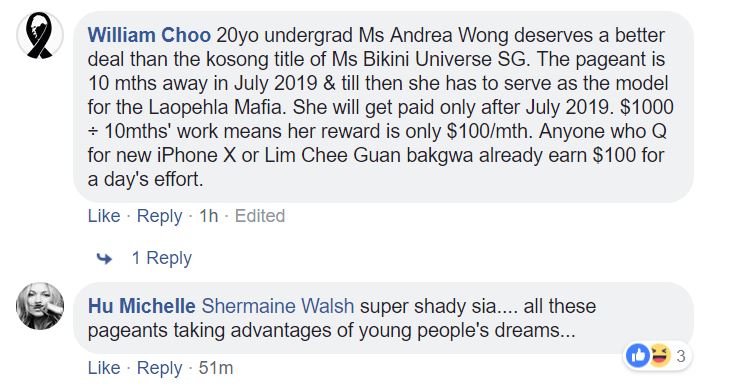 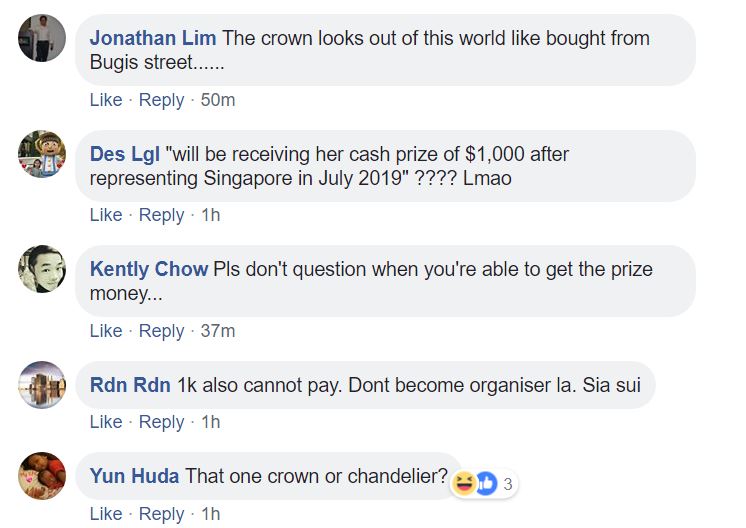