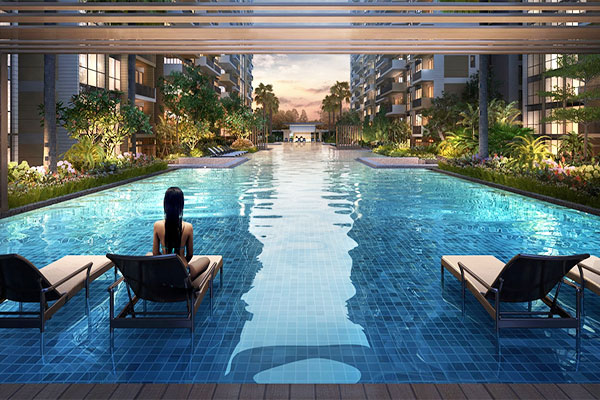 Data released by the Urban Redevelopment Authority (URA) today (Oct 15) showed that there were 932 new home sales last month, compared with 657 units in the same month last year. This data of new home sales is an increase of about 42 per cent from a year earlier, and a 51.1 per cent increase from the 617 units sold in August.

“September new home sales came in at 932 units with 1,169 units launched, bringing the total new sales for the first three quarters of the year to an encouraging 7,220 units.

“While demand exuberance is restrained by existing measures, developers are also observed to be phasing out their launches, drip-feeding the market with supply so as to react to market movements accordingly.

“At the same time, new thematic selling points were also employed in attempts to harness sales; Jadescape and Mayfair Gardens accounted for almost 44% of this month’s total sales. Patchy sales from other launches propped up the remaining sales figures. With a strong projected pipeline of launches, CBRE maintains its forecast of 8,000-10,000 units for 2018, driven by total price quantum supported by smaller unit sizes.”

The increase in new homes sales was due to a pick up in new projects being launched which generated interest among buyers leading to more transactions. An estimated 3,273 new private homes were sold in 3Q18 which is 38.3% higher than in the second quarter and 22.9% higher y-o-y.

JLL, a prominent real estate services company noted that the robust sales in the third quarter of 2018 were due to the sudden launch of Stirling Residences, Park Colonial and Riverfront Residences to beat the commencement of the new cooling measures on 6 July which boosted sales significantly.

These new home sales were 61.8% higher than the previous quarter and more than triple those launched in the same period last year.

JLL noted that there were seven new private residential projects came on to the market in September:

As for ECs, JLL said only 12 new ECs were sold by developers in September as unsold supply dwindled in the absence of new launches. Median prices of ECs sold in a few projects ranged from $918 psf to $1,014 psf. There are now hardly any new EC units available for sale, until the Sumang Walk project is launched next year.

“Market confidence seems to have improved with seven new private residential projects launched in September, achieving sales of 932 units during the month. The launch momentum builds on the four projects placed on the market in August which was affected by the Lunar seventh month. Post cooling measures, 12 projects were launched in a space of two months, which compares favourably with 24 launched in the first seven months of the year.

The 1,169 private homes launched in September is the highest number of monthly launches in 2018, not counting the 2,239 launched in July, which was a distortion due to the hasty launches on 5 July to beat the cooling measures. Awareness of the significant potential launch supply is prompting developers to continue putting their projects on the market to avoid a crunch in 2019, if launches are delayed.

While developers have become more confident in launching projects, they are still grappling in setting an appropriate price level to attract buyers. Those who do better in pricing (taking into account location and other attributes) manage to achieve better sales take-up, e.g. Mayfair Gardens and Jadescape. Even previously launched projects such as Stirling Residences, Park Colonial and Riverfront Residences are selling reasonably well at current price levels.

While it is early days to make a pronouncement of the full effects of the cooling measures, it would appear that while demand has slowed, many buyers are still on the market and are prepared to purchase at prices which they deem as reasonable. If the trend of launches can be sustained with fair sales take-up, market confidence is likely to improve and recovery from the cooling measures may be sooner than expected.”

If you are concerned about new home sales price, and unsure if you qualify for mortgage loans, our mortgage consultants at iCompareLoan can set you up on a path that can get you a home loan in a quick and seamless manner.

Whether you are looking for a new home loan or to refinance your existing one, the Mortgage broker can help you get everything right from calculating mortgage repayment, comparing interest rates all through to securing the best home loans in Singapore. And the good thing is that all our services are free of charge. So it’s all worth it to secure a loan through us.