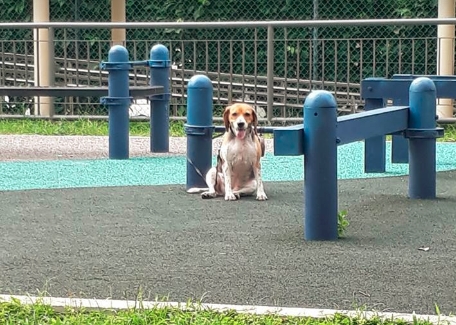 Facebook user Lynn Hamzah’s post about a dog which is left out to dry at a playground in Yishun has gone viral. The post has garnered over 1,500 likes since it was posted yesterday.

Lynn said in the post that the poor dog is left out to dry “like a piece of laundry by its owner every day” and that the owner kids’ always it under the hot sun for like almost an hour.

“It is always crying,” she said. Adding: “When i asked the kid, they say that it just had a bath and needs to dry up.”

She said that the dog’s owner lives at Blk 403 Yishun Ave 6.

Facebook user Hari Shankar who responded to Lynn’s post said that this has been going on for very long and that he had approached the owners to advise them countless times.

“But they just refuse to change their way of drying the dog,” he said and added that they lived on the 5th floor of the block.

The dog can be seen cowering under a shade in the playground in one of the pictures Hari shared.

Netizens who responded to Lynn’s message expressed outrage and hoped that the relevant authorities will take action to stop this animal abuse.Follow us on Social Media